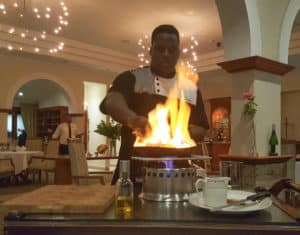 “The waiter proceeded to douse our dinner in booze and ignite it all” – Chateaubriand at Basil’s Fine Dining Restaurant.

They like to set things on fire in Limpopo. Long after the fashion for flambé was extinguished everywhere else, Basil’s Restaurant at Polokwane’s Ranch Hotel is still rolling out its gueridon trollies (yes, trollies plural) and serving up the sort of Escoffier-inspired culinary classics that call for a conflagration. Not ironic, deconstructed, hipster interpretations of old-school but rather the utterly unchanged real deal.

It would be easy to mock Basil’s dining room for its swirly 70s-style carpets and dangly diamante light fittings. It would be shooting canned lions in a barrel to find fault with the great excess of mangey big-five taxidermy in the foyer but to do so would be beyond foolish. Sensible souls will rather recognize the significant skills and fantastic food produced by both the front and back of house workers.

At least a third of the menu, both savoury and sweet, calls for culinary arson.  This, in turn, requires well-spaced tables between which the trollies can roll and the kind of highly skilled, career waiters that have literally died out elsewhere. Fortunately, these superb service professionals live on in Limpopo and offer a delicious display of showmanship, expertise, elegance and excitement.

My partner and I ordered the Chateaubriand (R360, serves two). The waiter arrived at the table equipped with a burner, an assortment of little jugs and a copper pan. He proceeded to douse our dinner in booze and ignite it all. The rare, centre-cut fillet was a perfectly tender triumph. The accompanying teeny tiny, identical turned potatoes only added to our excitement.

All of the above was wonderful but it was the sauce that really made the meal. I am of the opinion that what separates competent from truly great cooks is their ability to make a real sauce. Not those silly squeeze-bottle dots, flavoured-oil dribbles or unsightly smudges of blended goop that pass for sauce in most modern restaurants but proper, complex sauces that unify and structure the component parts of a well-conceived meal.  I am not being Eurocentric about this, my point applies as much to those creating great Congolese moambe or pad Thai sauces as it does to those making beautiful bigarades.

In matters of French sauce, Basil’s is the businesses. The menu makes use of all five of Escoffier’s mother sauces. Our fillet featured two such sauces on one plate.  The Chateaubriand sauce was a butter-finished glistening, chestnut brown, meat and mushroom essence.  It was an eloquent articulation of all that we have lost in a world which deems slow, reduced flavour to be too costly and time prohibitive to be practical. At Basil’s, they understand that spending an entire day transforming a pot of liquid into a few cups stock, and a cup of stock into two tablespoons of sauce is time well spent. There was also an exquisite Béarnaise whipped into a froth of ethereal lightness.

After our main course we were full to bursting but (since I had no way of knowing when I would be able to indulge my pyromania again) I insisted on crêpes Suzette (R90). Again, the waiter doused, soused and flamed up a delicious tableside performance. So, it was that the queen of retro desserts was crowned in a heavenly blur of caramelized butter and citrus-laden booze. Food as entertainment doesn’t get better than this.

The well-priced, predominantly South African wine list flows from sparkling to dessert with an emphasis on iconic estates. Wines by the glass are plentiful. Food pairing suggestions are sensible.  There are all sorts of good time, space, skill and health reasons why modern restaurants seldom offer such food and I am sad about all of them. Basil’s is a museum piece of the best sort. I highly recommend a weekend in Polokwane setting fire to food.

Even the most dedicated animal observer must occasionally stop for food and, outside of the über-expensive, elite lodges, most eateries in the Kruger National Park are deeply depressing. It seems...

Afternoon tea is superfluously sandwiched between lunch and dinner. No one actually needs it but, as anyone who has ever eaten an afternoon tea knows, need is not the point....

Restaurant XIX is inside billionaire Douw Steyn’s eponymous, state of the art, super-luxurious life style development. Situated between Fourways and Lanseria (with the slums of Diepsloot in between) this walled...