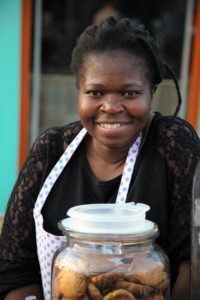 Dr Mavhungu, Tracy Nelwamondo has an MBBCH from the University of the Witwatersrand and a medical practice specializing in the use of heritage and indigenous food to combat modern lifestyle diseases. Twice a week she sets up shop at the Bryanston Organic Market. Her Modern Traditions stall stocks a superb selection of fresh and dried South African legacy ingredients for home cooking projects. Jars of bambara nuts and dinawa cow peas compete for customer attention with whole grain mabele sorghum and dried baobab powders. She sources her offering from the Niani district of Venda, Limpopo, in a manner that is both respectful and rewarding for the communities from whence they come.

The high-quality raw ingredients are a godsend for anyone seeking gluten free, low gi, organic and fair trade heritage tastes but, for me, the magnificence of Modern Traditions is in the pre-prepared products. The problem with many purveyors of food made from indigenous ingredients is that they are often so interested in the health giving and historical nature of such crops that they don’t put sufficient thought, effort or skill into cooking them. When selling food being interesting and/or virtuous is not enough. It needs to taste good too. Quite often it doesn’t.  The good news is that Dr Nelwamondo is a magnificent and conscientious cook. She has no formal food training but she has the culinary equivalent of green fingers. Everything she touches turns to yum. She has a particular knack for sweet-toothed treats. Mabele, cacao muffins are deliciously dark and silky. The marula nut butter and mushidzhi morogo biscuits have a fabulous fudgy texture that (willpower allowing) can keep well for several days and really hit the spot when that late-night biscuit craving comes a-knocking. 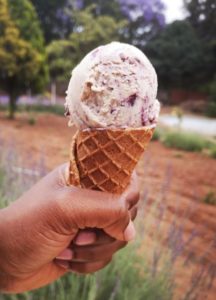 The stars of the show are the marula nut ‘milk’ vegan ice ‘creams’. Apologies for the irritating air quotes. I know that bean and nut milks are a thing and that all sorts of perfectly sensible people use them but my previous experience of vegan ice ‘cream’ has been that dreadful, chalky, soy-based stuff. Eating it has felt blasphemous to the real deal –  the epicurean equivalent of reciting the Lord’s Prayer backwards in a coven. Hence the passive-aggressive quotation marks.

No need for the snide stuff at Modern Traditions. These are frozen desserts so wonderfully creamy in taste and texture that I struggle to get my head around how it happens. Each time I eat it – which is often – I feel the need to ask Tracy yet again how she makes it. I can’t quite believe that I haven’t missed something in the method and ingredients. Each time she patiently explains that there is no cow’s milk or chickens egg involved in the process. There are no gums or fillers in the mix. Just marula nut milk, baobab and honey (or coconut sugar for those vegans who don’t do bee bi-products).

The results are some of the smoothest, most thickly luxurious ice creams you will ever taste. Ambrosially, expressively generous and not overly sweet. Each offering has a glorious vividness of flavour and fragrance. My current favourite is rippled with seasonal mulberries and delivers the luminous essence of summer. The velvety chocolate offering is downright dangerous. Woe betide anyone who attempts to wrestle the tub from me while I am in the process of polishing it off.

The good doctor is promising to come back from her next trip to Limpopo with mobola gingerbread plums to add to her repertoire. No, I hadn’t heard of them either – and Wikipedia suggests that they are not really plums – apparently, they are crisp like apples and taste like strawberries. Which sounds like exactly the sort of fruit that would be fabulous in an ice cream. With or without quotation marks. I am waiting with breath that is bated…