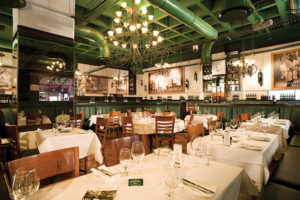 I was tired and hungry from shopping at Sandton City. I was making (yet another) half-hearted attempt at Banting. So, I stepped inside The Butcher Shop and Grill in search of a steak. Everyone knows The Butcher Shop and Grill. It occupies a significant chunk of Nelson Mandela Square so it’s hard to miss. I hadn’t eaten there in years but everything was just as it had always been. The same taxidermy beasts were still looming over the same dark wood and brass décor. There were still perfectly pressed white linen table cloths and rows and rows of Pick’s Pick wines (labelled in honour of the restaurant’s owner Allan Pick) lining every available surface. The glass eyed, stuffed hippo now has a do-not-touch sign on his bum but other than that was all exactly as I remembered it.

Eating alone was educational. Without the distraction of a companion I could really study the restaurant and, of course, eavesdrop shamelessly on fellow diners. I was definitely the odd one out. Y chromosomes doing deals over red wine and man-sized steaks were everywhere. My uniformed, old school waiter seemed to be suffering from the aftermath of serving one too many tycoon or mining magnate. He was far too well trained to say anything but his body language showed that I was a deep disappointment to him. He put me out of sight so as to not discourage more eligible eaters from entering the premises.

From my sheltered spot I observed my fellow diners. It was immediately apparent to me that the steak-based stakes were high. In 1997, Justice Malala wrote of Johannesburg steakhouses that they were “packed with mustachioed men with hair on their arms, and their empowerment targets who order huge steaks and spit at each other as they discuss the deal … I can’t tell you how many times my friends have had to bear a nasty steak just so that they could listen to BEE deal prospects”. In the almost two decades since Malala made his observation racial power relations have changed somewhat but there still seemed to be a lot at stake amidst the steaks. Everywhere I looked meat was a metaphor and epicurean intimidation was the order of the day.

It was exhausting even to watch. The men at the table next to mine were intent on showing each other how blood thirsty they were. Everything they ate was raw. First came Carpaccio, then Tartar (paired with Remy VSOP) and an assortment of absurdly blue steaks. A little further away the theme seemed to be offal machismo. I could see it was a competition but I couldn’t tell who was winning. I wasn’t sure if there were more points to be gained from kidneys on a skwere or gnawing at izimbabo lamb neck. The seasoned waiters clearly could keep score. They assessed who was in charge and consistently set his food down first. They knew where their tip was coming from. The disappointment of those served second was immediately evident.

Malala described his steak as “nasty” but my rump was superb – simultaneously sweet and savoury, robust with umami notes. I was so intrigued by the power hungry politics around me that I forgot that I wasn’t supposed to eat the delicious onion rings  – thick and crunchy inside with the lightest bouffant batter on the outside. After all these years, the combination of capitalism and carbs tastes great.