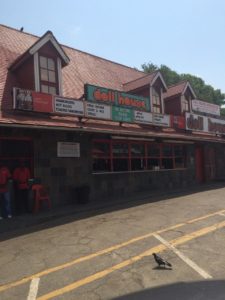 Anyone who grew up in Johannesburg (or, as in my case, wishes that they did) has a Dollhouse memory. The origins of this iconic Highland’s North roadhouse are unclear but there are photographs of the venue (complete with moving waiters looking blurred and ghost-like in the long exposure) dating back to 1940 – so, that’s at least 74 years of double thick strawberry milkshakes. In those early photographs the sign telling customers to flick their lights when they are done with their dinner is clearly visible.

Memories of the Dollhouse differ. There are cute reminiscences of first dates. There are less cute tribal violence recollections – a friend (who insisted on anonymity) remembers “when I was at school in the ‘70s there was a synagogue next to the Dollhouse where socials were held for Jewish youth. Nearby was a hall where the Lebanese youth had their socials. The Dollhouse – in the middle of both – was the meeting ground for our cross-ethnic battles.”

Then there are the gastro-political stories. On April 7th 1960, the Unlawful Organisations Act No 34 of that year resulted in the banning of the ANC. That afternoon anti-apartheid struggle stalwarts Joe Slovo and Helen Joseph went to the Dollhouse to discuss the way forward. Whether they ordered the Blondie sandwich (beef patty, steak, bacon and eggs stacked between slices of toast) or the Hawaiian pineapple burger is unknown but the importance of a venue without security police listening devices has earned the establishment a place in our long walk to freedom.

My own  Dollhouse story is much more trivial. A few years ago a friend bought a Fortuna (the car) and insisted on taking three friends there to order four tuna sandwiches. Fortuna, four tuna. Geddit? Terrible pun and, as it turned out, pretty terrible sandwiches too but it entertained us.

The glory years (when it was difficult to find a parking spot) are long gone. These days the large lot in front of the Dollhouse is almost always empty but for a few police cars. On investigation it becomes apparent that the cops just park there and walk across the road to Nussbaum’s Kosher butchery (who give them free biltong and are consequently almost never without an onsite police presence).

Something has got to give and it seems likely that phase 1C of Rea Vaya bus route construction will be the final straw in the Dollhouse’s Cream Soda. Road works are everywhere. Louis Botha Avenue is a logical link between the CBD to Alexandra township. With the prospect of a decent bus route on the horizon, property developers are rapidly buying up land. Redevelopment and densification are coming. It is surely only a matter of time before the owner of the Dollhouse is made an offer he can’t refuse.

So, I took my six-year-old to the Dollhouse in order that he should experience this epicurean icon before it was too late. The venue looks and feels worn to a ravelling. Aging waiters clip aging trays to car windows. Ours told me that he had worked at the Dollhouse “since before you were born” but I got the sense that he says that to all the girls. The powerful old oil smell that hangs dense and deep in the air suggests that perhaps the extractor fans have not been cleaned in almost as long.

Despite the smell, the food is rather good. The menu pays homage to the glorious culinary combination that is fat and carbohydrate. It is late night munchies/ hangover cure cuisine at its best. I ordered the kind of man-sized, artery-clogging Dagwood sandwiches that more modern eateries are too timid to proffer. Miss Piggy once said that you should never eat anything bigger than your head but I did. My boy’s bacon cheese burger could have done with more bacon but the fat, salt slaked chips were just as they should be – crisp on the outside, soft and giving in the centre. The banana milkshake was made with real banana.

The Coke float was a tall glass of nostalgia topped with a Maraschino cherry. In truth it was not nostalgia. It was the taste of a warm wistfulness for an imagined past never actually experienced. Each sip had the kind of pick-and-choose pleasure in a time with bobby socks and swishy pony tails but no Un-American Activities Committee, White Australia Policy or Apartheid South Africa. From our rose tinted viewing point it all tasted damn fine.

When we were done we flicked our lights. Some things never change. Until they do. Go now while you still can.