I recently met a charming and intelligent woman who often eats at Free Food in Melrose, Johannesburg. She does so by choice and gets pleasure from the experience. She tells me that chef Ariel Cohen is terrified that customers with questions are actually spies from other restaurants seeking to steal his recipes. I mention my new acquaintance’s charm and intelligence because I wish to emphasize that mine is but one opinion. There are other perfectly sensible people who think highly of this venue.

For what it is worth, my opinion is that there is absolutely nothing at Free Food worth stealing a recipe for. Unless, as I once read Elizabeth David did, you collect absurdly disgusting recipes and send them to foodie friends as a joke. In which case I dare you to request a recipe for Free Food’s agar-agar and courgette jelly.

When I asked the chef questions about my lunch I was doing so because I was genuinely puzzled as to how anyone could desecrate ingredients and mangle cooking methods to such an extent. I wanted to understand how a noble desire to make meals that are free from animal products, gluten, wheat, refined sugar, preservatives etc. had gone so horribly wrong. The responses were consistently skittish and sometimes surly. Now I know why. 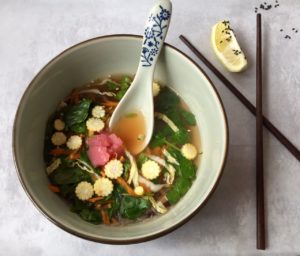 Summer blossom broth – “a bowl of water as soup”.

I started with what might have been a harmless, if pricy (R90), vegetable stir fry but for the chalky, under cooked taste and texture of its accompanying rice flour wrap. Then there was the prettily titled summer blossom broth (R107) which turned out to be so watery that it appeared as if no stock base had been prepared. Bits of corn and kale bobbed about in it. The afore mentioned bowl of H2O was described on the menu as ‘clear and pure, Asian inspired’ which is an insult to the many great, Asian food genres with long standing culinary commitments to the vegan way of life. Not one of them would send out a bowl of water as soup. Eschewing animal products does not exempt a chef from the requirement to create flavour.

The herbed tofu ravioli (R89) were seemingly prepared by someone who hates pasta, Italians or perhaps life in general. The dough was as thick as the grade one jam tart project. It was really rather impressive how apparently glutinous the texture was given the establishment’s emphasis on the how gluten-free they are.  The ravioli sulked in a sea of what the bill of fare advertised as roasted butternut and tomato sauce. It tasted suspiciously like boiled pumpkin. I suspect pumpkin because it is really hard to get butternut so thin and insipid. The vegetable’s natural fortitude just doesn’t allow for it. It is true that many of this season’s tomatoes have been very bland but try as I might I could find no trace of their presence in the orange liquid. 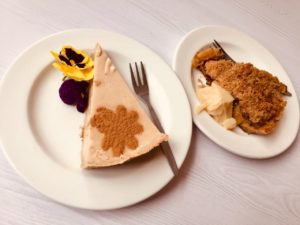 There was a dismal (R57) almond milk melk tart with a limp brown rice flour, sweet potato and date crust. It was accompanied by the aforementioned agar-agar and courgette glob.

I am going stop there because shooting fish in a barrel is no fun for the marksman or the fish. Anyone running any restaurant in this economic climate is a hero. And that other lady likes it a lot.