Poke (pronounced po-kay) is having a moment. All the hippest of hipster hot spots are serving Hawaiian raw fish cubes with rice, assorted greens, pickles and sauces. It seems rude to imply that an ancient, culturally significant dish is a transient trend, but such is life.

Poor poke is so much more than a flash in the pan culinary craze. As Martha Cheng recounts in The Poke Cookbook ‘long before contact with the West, native Hawaiians ate i‘a maka, raw, shallow water, reef fish, cut crosswise in pieces (the literal meaning of the word poke). They added alaea salt (stained red by volcanic clay), tossed in roasted inamona kukui-nut hearts, crisp pahole fern fronds and limu dried seaweed’. The Japanese immigrants (who’s descendants now make up 60% of the state’s population) arrived to work on Hawaiian sugar plantations in the 1870s. They brought with them their own raw fish traditions, a preference for the larger fish of the deep (most notably ahi, yellowfin tuna), rice and umami boosting shoyu (Japanese soy sauce). A combination of all of the above resulted in the development of a terroir specific, fast food, fusion form.

In Hawaii poke is not posh. It is generally sold by weight in plastic tubs at convenience stores and even garages. In the last few years poke has been picked up and given a Millennial makeover outside of the Aloha state. Sometimes referred to as ‘next generation of sushi’, poke’s recent popularity is in part economic in origin – the fish is roughly chopped and piled so it requires far less kitchen skill and can be made with less expensive cuts than sushi and sashimi. It is equivalently Instagram pretty but it has none of the inflexible formality that so often accompanies Japanese cuisine. And it is served in a bowl. Don’t discount the importance of chic crockery – The Wall Street Journal recently proclaimed that ‘bowls are the new plates.’ No self-respecting foodie fashionista would risk the social stigma of eating on a flat surface.

The poke produced by the Island Bar, Southern Sun Hotel Hyde Park is definitely more glam gourmet than garage forecourt fare. Real life fades away amidst the strikingly beautiful rooftop setting with panoramic views and tables set around an azure infinity pool. There is only one Johannesburg hotel restaurant with a more impressive vista and sadly the food therein is so consistently dreadful that it is unusable. This, the 2nd best view, is the way to go. Here, high above the hoy polloi, sit socialites with trim waistlines and bulging wallets. The Louboutin-heeled, iPhone-carrying selfie set adore Chef Grant van der Riet’s weekends only, two-person poke deal. One thousand rand buys a bowl of the afore mentioned taste treat and a bottle of Veuve Clicquot Rosé. Take note. There is no flexibility in the poke package. It must be the weekend. You must be at least two diners. You must order the Champagne and the poke together. 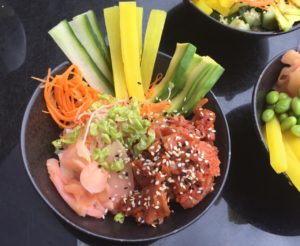 I had the salmon poke while my date chose the tuna bowl. My chunks of (Norwegian, farmed) salmon were large enough to give a sense of plushness on the tongue. Either it was absent or the combined efforts of a soy, ginger marinade, tart pickled daikon and subtly sweet, briny wakame seaweed disguised the disconcerting oily texture that salmon from such sources so often exhibits. A commendably fluffy cushion of rice, black and white sesame seeds, tiny bias-cut circles of spring onions and an emerald green offering of edamame beans completed my picture-perfect poke. Across the table my friend enjoyed cubes of pole caught, kimchi tossed, yellowfin tuna poke. Bright, crisp, vinegary pickled carrot ribbons played a game of compare and contrast with strips of earthy, moreish kanpyo (reconstituted gourd skin) and slices of silky avocado.

It all tasted very good so what follows is not so much a complaint as a concerned and confused query. Chef van der Riet and his team work exclusively with fish from so-called sustainable stocks but am I the only one finding it increasingly difficult to determine exactly what that means when it comes to tuna? I understand the current criteria, I am just not sure if I agree with them or trust the local and international authorities tasked with upholding such standards. Add to this the complexity of identifying the few good guys from the many bad ones involved in the farmed salmon field and I am increasingly uneasy about eating all forms of both fish. Above and beyond ecological anxiety I am ready for some new tastes and textures. Since poke when translated from Hawaiian, simply means to slice or cut there is no reason why it always has to be tuna and salmon. The original poke wasn’t. You can poke anything. So why don’t we?

Once long ago, I taught Chef van der Riet at the Prue Leith Chef’s Academy and so, even though we were only entitled to 2 bowls, I twisted his arm to let us try the vegetarian poke bowl too. No good deed goes unpunished and I am rewarding his kindness with a criticism. Basically, what came was the tuna bowl minus fish. Given that all three bowls are sold for the same price it seems sad not to add a few marinated mushrooms, salt plums, ancient grains or even tofu. Something. Anything to help the herbivores feel special.

Fortunately, pink champagne makes everyone feel special. The full-bodied, deliciously fruity, cherry rich flavours of the wine stood up well to the umami-laden shoyu dressings and the crisp pickled vegetables. Aroma of ginger and citrus peel enhanced the textural interest of sparkle. The balanced acidity sliced through the fat succulence of both fish. Every sip cleansed the palate leaving it refreshed and ready for the next bite. In short, it did what a pairing should do – it went well with all the elements involved without getting lost. It brought additive companionable complexity.

Again, it seems churlish to question the non-optional wine pairing but here goes. Why must the poke come with champagne? There are economic and taste considerations to think of. R1000 is a very good deal for that particular wine – surrounding restaurants are selling the same bottle without food for between R1950 and R1400 – but it is still a lot of money. Its inclusion means that what could be a pleasant, healthy, light lunch has to be saved for special occasions. Some people don’t drink alcohol. Others are not big day-time drinkers. The wine was very nice but after lunch, I had to go and have a nap. Had it been an option, I might well have chosen coconut water. Even those who can booze during daylight hours may prefer other alcoholic options. Light lager would work well with poke as would all sorts of fruity cocktails.

But enough. Poke and pink champagne at the Island Bar makes a lovely, luxurious, lingering lunch. The food is good and the wine pairing works well. The 2nd best hotel view in Johannesburg is fabulous.