Kismayo Somali restaurant is at the Amal Centre (also known as Little Mogadishu) on Albertina Sisulu Street in Mayfair, Johannesburg. The centre has no discernable street number and it can be confusing to find as almost everything in Mayfair is somewhere on Albertina Sisulu. It is a long, long thoroughfare. For those seeking Somali, the restaurant’s nearest corner is Somerset Road so your best bet is to get to Somerset and start asking. Everyone under 12 can speak perfect English. Adults, not so much.

Kismayo is a single-roomed eatery at the end of a rabbit warren of small shops staffed by burqa-clad ladies. When I arrived at the end of the corridor, I peered tentatively into the darkness of the dining room. There were delicious smells emanating from the kitchen but as far as I could make out all the diners were Somali and male. The customers looked at me and I looked at them. There was an awkward silence. I wondered whether to beat a retreat. I was unsure what the etiquette of being a non-Somalian, female person and without a burqa was in such circumstances. Then my seven-year-old son (who had accompanied me on my mission to Mayfair) stepped forward to tell me he wanted a Coke and the Somalis visibly relaxed. He was dressed (as he often is) as a Ninja Turtle (complete with bright green nylon jump suit, plastic shell and mask) but there was much patting of the turtle’s head and uncle-like indulgent chuckling. A woman alone seemed to be a source of anxiety but one accompanied by a small male bionic reptile was acceptable. We were beckoned inside.

Food was displayed in chafing dishes behind a glass counter. A framed Halaal certificate and a set of block-mounted photographs of great world cities provided the only décor on the tiled walls. In each picture a small neon Kismayo sign had been cut and pasted into the image. It was like a Somalian version of Where’s Wally? The turtle and I passed several happy minutes finding the Kismayo signs while an English-speaking waiter (in a school uniform) was rustled up. I did enquire and discovered that the branches depicted in the posters are ones that the owner hopes to open in the future rather than an existing epicurean empire currently trading next to the Tower of London, the Sydney Harbour Bridge, Mecca and the Empire State Building. 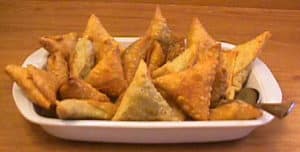 The turtle and I were unfamiliar with Somali cuisine so we asked the waiter to pick for us. For me he brought a crisp, aromatic sambuusa (a Somali version of the samosa spiced with peppers, cloves, ginger and ground lamb) followed by followed by zurbian (a superb, lamb-laden rice, spice and potato melange). Rich in cinnamon, cumin, cloves and turmeric it was like a biryani but better. The turtle tried a slightly sweet lahoh pancake/ flatbread which came with pots of clarified butter and honey and then a curious post-colonial Italian fusion dish that the waiter described as ‘baasto’ (pasta tossed with tuna and green peppers). The baasto was over-cooked to my taste but who knows if the rules of al dente apply in East Africa. The turtle liked it just fine and finished a big bowlful. I was much praised for my son’s fine appetite. Coffee was intense, dark and flavoursome. It was served with a cardamom-rich sponge cake that I thought the waiter called ‘doolshe’ but when I asked him to spell the word for me it was of course the Italian word dolce.

Seldom has a Ninja Turtle (or a turtle’s mother) eaten quite so well for R60 (including tip).