Almost everyone loves prawns. Dipped in piri-piri, rolled in sushi, curried with coconut milk, gussied up with retro-chic irony as prawn cocktails or simply skewered and braaied, nothing beats their sublime, sweet, savoury, firm, tender, totally delicious taste and texture. But do you love them enough to stomach a garnish of slave labour and ocean destruction with your crustaceans?

The sad truth is that most prawns sold in South Africa ought to be leaving consumers with a very bad taste in their mouths. Prawns are farmed and wild caught all over the world but whether they tottered about on their spindly legs in Mozambican, Thai or Mexican waters these delicious crustaceans generally prefer brackish conditions – which is why those farming them favour what were once tropical mangrove forests, cleared and cut off from the sea by sluices.

Mangroves matter and their widespread destruction to feed our greed is a big problem. These zones of trees, growing at the water’s edge and in shallow seawater, have historically provided breeding grounds for fish and a mechanism for filtering and cleaning oceans. Not anymore, they are increasingly packed with intensive prawn farms. Spare a thought for the poor prawns. With the exception of brief spawning season gregariousness, almost all species are solitary. Throngs are not their natural habitat. Diseases develop and spread in crowded conditions and farmers routinely add antibiotics to the water. The risk of disease is increased by low quality, fetid fishmeal dumped into the water. Once fat, the sluice gates are opened, the prawns are trapped in a filter, frozen and sent off for sale. The remaining filthy lagoon water containing several months’ worth of excreta, food waste and antibiotics, is commonly washed out into what’s left of the surrounding mangrove forests or straight out to sea.

The wild, sea catch is equally unsavoury. Many of us imagine small scale prawn fishers bobbing about in little boats amidst sustainable seas. Think again. Think industrial bottom trawlers with very high bi-catch levels. Up to 90% in some cases. In pursuits of prawns, millions of sea turtles, sharks, dolphins, crabs, sponges and many, many juvenile fish are caught in the crossfire and killed. In this way, entire tranches of marine life are being swept away.

But wait! There’s more. It is not just the sea creatures and their eco-systems having a hard time. The majority of prawns sold in South Africa come from South East Asia where Human Rights Watch report widespread human trafficking and labour abuse in crew conditions.

Almost all the prawns on sale in South Africa have some combination of the above eco-epicurean nightmare marinated into their flesh. Whether in eating out in restaurants or shopping for home cooking, caring consumers need to be armed with information.

We should all give up eating prawns and opt instead for other, more sustainable seafood such as calamari and mussels. Daisy Jones’s superb and multi-award-winning South African-specific sustainable seafood recipe book Starfish (Quivertree Publications) is an ideal place to those wishing to start a new life and prawn-free existence.

If giving up prawns is not part of your life plan – and, realistically, it isn’t part of mine – look out for the Aquaculture Stewardship Council (ASC) certification mark which reassures consumers that the farming and processing standards are ethical. Be warned, ASC prawns are hard to find. SASSI currently classifies all prawns from Mozambique are either orange or red listed. I went to all the major supermarkets in search of sustainable prawns. I did find one packet of green listed, Vietnamese prawns at Woolworths but that was it. 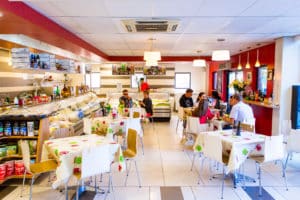 The deli at La Marina.

Except La Marina Foods at Moderfontein. They stock Madagascan farmed Unima prawns. This company not only practice responsible aquaculture but also sponsors schools, hospitals and sanitation services for their workers. In 2007 Unima formed a non-profit partnership with WWF in order to preserve and promote the mangroves. Since 2010 the company has planted 922,000 mangrove trees. Continual environmental monitoring over almost two decades (measured in collaboration with the University of Arizona and according to a checklist of 18 indicators) has shown zero impact of farm effluent on the coastal ecosystem.

Focus on how awful the mangrove destruction and baby starfish deaths are because finding La Marina is quite hard and if you haven’t been there before you will be tempted to give up and go home. Remember the slavery and keep going. First time visitors almost invariably stagger across the threshold into this most fabulous fishmonger, red in the face and oozing irritation from every pore. Often, they are annoyed with themselves because they have repeatedly driven past their desired destination refusing to believe that the warehouse in the non-descript business park is actually what they are aiming for.

La Marina is located in an out of the way spot because the primary purpose of the business is not retail but wholesale, certified sustainable seafood sales. Inside the unprepossessing warehouse there are hundreds of white booted, hairnet wearing workers filleting the finest fruits of the sea. Including the afore mentioned Madagascan prawns.

You can either buy your prawns and take them home or stay and eat them there and then at the tiny café at the front of the warehouse. Why stop at prawns? All the seafood at La Marina is ecologically sustainable. The menu is a single laminated sheet on which an assortment of predominantly seafood choices is listed. You can have a bacon sandwich but why would you? Crockery, cutlery and stemware are chosen for strength and practicality, not beauty. Often there is no difference in the menu price of a cooked item and the shop price of the same ingredient raw. This is also true for the alcohol on offer. Certified, sustainable Mauritian Seabass are served simply with plump, salt slaked chips. Friends of the Sea Yellow Fin Tuna from Mauritius makes magnificent sushi. Legal abalone and oysters galore are a delight.

For a long time, the business had no liquor license and La Marina owner, Kirsten Jooste, would waft amongst her customers dispensing free Prosecco. Sadly, the Gauteng Liquor board finally got its act together and there is now an alcoholic drinks menu that customers have to pay for. The selection is small but suitably stylish. Lovely Lindeman’s Belgian peach beer is joined by two SA whites, two SA reds, Prosecco and Champagne (both of which are available by the glass). A comprehensive collection of German beers complete the booze bill of fare.

So how do the virtuous prawns taste? When compared with the hormone and antibiotic laden, floury offerings served elsewhere, the flesh on the Madagascan prawns is exquisitely plump, sweet and flavoursome. They aren’t cheap – 2kg sells for R962 but what do you expect. Paying salaries and not destroying life, the universe and everything costs considerably more than slaves and a scorched earth policy.