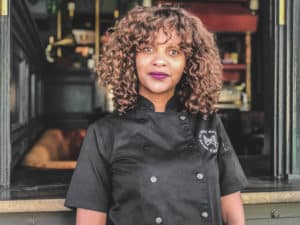 Chefs Tyeya Ngxola and Timothy Stewart opened La Petite Maison in February 2019 and ran slap bang into the hell that was load shedding. Theirs was a baptism by fire (literally as none of the electrical appliances would work) and there were teething troubles in terms of quality and speed of food served. Initial reports were mixed. No one doubted the pair’s potential but consistency was a problem. Fortunately, necessity has been the mother of invention, modified menus have overcome Eskom’s inadequacies. Ngxola and Stewart are now maintaining the magic night after night.

Blink as you drive along the hustle and bustle of 7th Street and you might miss La Petite Maison. It is a teeny tiny sliver of a restaurant which can seat no more than 20 diners. Intimate and elegant, cobbled floors, upholstered velvet banquettes and low-key jazz set the scene. But for the absence of cigarette smoke and dog poo on the pavement outside the restaurant, a diner might imagine that they had passed through a portal into Paris.

The youth and beauty of Ngxola and Stewart belies their significant training, skill and international experience. The pair are graduates of Prue Leith Chef’s Academy, Centurion and Alma; La Scuola Internazionale di Cucuina Italiana, Parma, Italy. Between them, they have racked up some impressive kitchen time with stints at Cape Town’s The Test Kitchen and The Greenhouse followed by several Michelin-starred Italian eateries including La Fiorida and Antica Corte Pallavicina.

La Petite Maison’s menu reflects local and international influences. While the cooking methods are generally classic French and Italian, it is the South African land and seascape that provides epicurean inspiration. Lunch time diners are offered charcuterie and cheese platters but those eating in the evening are taken on three-, five- or seven-course culinary journeys with across our epicurean environment. Vegan and meat-based tasting menus are available in which each course represents a region. Prices are at the reasonable end of average for such fine food. Three courses without wine costs R400 and R550 with wine. Five courses without wine is R550. With wine it is R800. Those who splash out on the seven-course tasting menu will pay R750 without and R1100 with wine.

The wine list (like the food menu) is small and focused with an interest in quality ingredients, natural methods, seasonal suitability, and provenance. There is a refreshing willingness to take a chance on lesser known grape varietals and small, independent new winemakers. Plenty of chefs pay lip service to the importance of food and wine pairing but Ngxola and Stewart seem to actually understand and revere the symbiotic relationship between what’s on a plate and what’s in the glass. Their suggested wine pairings elevate in every instance.

My meal started with an Atlantic Ocean inspired, jet-black swirl of squid-ink risotto topped with golden calamari coils. Contrasting textures came together with just the right amount of give and bite. Each fruity, fresh, lime-laden sip of 2015 Fledge and Co. Hoeksteen unwooded Chenin Blanc brought beautiful structure and clarity to the creamy, rich, rice.

The Karoo came next with a silky, dice of ostrich tartare dotted with bouffant blobs of aioli. A light, thirst quenching Magna Carta vin de soif white merlot quenched the saline tingle of crisp, fried capers. Is there any sound finer than the crunch of pork crackling between molars? Sometimes I think the snap, crackle and pop of ice meeting gin and tonic comes close but not today. Crunch gave way to tender fat and slow cooked, soft strands of belly meat in a rectangle of Magalies-bred pork. Slices of fresh fig and a glistening, chestnut brown, star anise-infused demi-glace sauce met and matched the intense ruby red berry, plump quince and subtle spice flavours of Holden Manz Visonaire, 2013.

Plums mark the moment when summer turns to autumn so it was slightly sad to see them served with the Hogsback-inspired poultry course. But not so sad that it wasn’t wonderful to taste their concentrated tang against the caramelized skin and rosy pink interior of bias cut duck breast. The addition of Catherine Marshall, Pinot Noir on Sandstone Soils 2017 not only underlined the dense fruity flavours but also added a layered, earthy savouriness.  Palates were cleansed with a Tzaneen-inspired mango and rum granita.

Perhaps, the chefs sensed my need for reassurance that summer wasn’t on its way out when they sent a fruit forward froth of raspberry fool, topped with pistachios and cradled in alternating spheres of white and dark chocolate. I was having such a nice time that I forgot to ask the chefs or the charming waiter, Brian Dumani, more about the lovely unlabeled, accompanying noble late harvest. Whatever the wine was, it glowed with golden sunshine kissed, honey and almond scented cheer. A jolly good time was had by all.

Running a restaurant is exhausting at the best of times. Opening one against a backdrop of load-shedding is for superheroes. These superheroes are a great addition to the neighbourhood.