Qunu Grill is on the ground floor of the super-smart Saxon hotel. Reviewers almost invariably ignore it and rather write about the establishment’s second floor, fine dining space. In the past decade the afore mentioned upstairs eatery has been variously known as 500 (under chef David Higgs), Luke Dale-Roberts X the Saxon and now Grei (under Candice Philip). 500 and LDR X Saxon might charitably have been described as disappointing; Grei is showing real promise, but none of the upstairs offerings have been anything like as good as the food currently coming out of Qunu.

Retro-chic, hotel grill room classics are well represented on the Qunu menu. The steak Diane (flambéed tableside) is a beauty to behold. The seafood platter’s lobster thermidor is glorious in its old-school opulence. It is when the chef turns her attention to African indigenous ingredients that her culinary creativity bursts forth. This aspect of Mulry’s output fits into a global gourmet philosophy whereby chefs reimagine terroir-specific, heritage flavours for modern palates. Some of the plates at the Qunu Grill merit comparison with the best of New Nordic cuisine from René Redzepi at Noma in Copenhagen, the Amazon-inspired dishes at DOM in São Paulo and chef Pierre Thiam’s West African modern masterpieces at Nok in Lagos. When done properly, this food movement not only offers fine flavour but also has the potential to provide respect to ingredients, indigenous knowledge and culinary cultures that have often been overlooked and undervalued. It requires chefs to form mutually beneficial connections with small scale farmers and foragers. Done badly there is the potential for cultural appropriation and biopiracy. 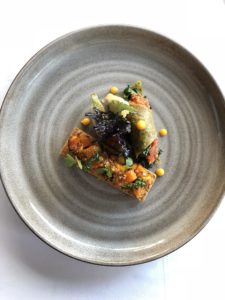 I can’t offer much insight into the dessert menu beyond saying that it appears to be a well-balanced listing of nut, dairy, chocolate and fruit. I am sure the various puddings, possets and macerated whatnots are delicious but I am incapable of seeing past the presence of Saxon torte which has been Qunu’s signature sweetie since the restaurant first opened. So that is what I ordered. Again. This light, dark, intense, understated elegant chocolate delight has just the right amount of stick-to-the-fork moistness to ensure that no other dessert offering stands a chance.

The wine list is almost overwhelmingly impressive with an extremely broad selection of local and imported wines with every imaginable varietal, style and vintage. Sommeliers are knowledgeable and enthusiastic in their pairing advice for both classic Eurocentric restaurant fare and the more unusual African ingredients.

My only quibble with this otherwise extremely impressive eatery pertains to the historical accuracy of its menu preamble – which states that the restaurant has been so named “in honour of the small rural town where our beloved elder statesman, former President Nelson Mandela, was born.” But he wasn’t. Madiba was born in Mvezo. Mvezo is where the Mandela hereditary chieftaincy was restored in 2006. Qunu was the community to which Madiba’s mother retreated with her children when his father, Nkosi Mphakanyiswa Gadla Mandela, was deposed and impoverished by the colonial authorities in 1926. As such Qunu held a significant place in the late President’s heart and it is where he is now buried but it was not his place of birth. I strongly suspect that the menu preamble predates Mulry’s arrival at the Saxon but accuracy and acknowledgement are important. Anything less might be construed as disrespectful. Not only to the late President but also to the potential power of the plates.

I know what the regulations say but I am not yet ready to return to restaurants. I will continue to support struggling food businesses by purchasing takeout but actually eating-in...