For those who missed it the first time around, the term tiki with a lower-case “t” is used to describe a mid-century, American-initiated décor and hospitality motif which, depending on your point of view, either paid homage to or made a mockery of Pacific Island cultures. Tiki bars and restaurants had thatched roofs, dug-out canoes on the walls and lots of ukulele music. The food had a vaguely Hawaiian-Asia fusion feel (think rice, pork and pineapple bits) and the fruity rum cocktails were served in mugs designed to look the Tiki (capital “T”) icons that are carved and venerated across a range of Polynesian cultures. While tiki bars began in the USA, the enthusiasm for island escapism spread worldwide. The Bali Hai tiki restaurant and bar at Johannesburg’s luxury Landdrost Hotel (corner Twist and Plein) was still hula-ing up a storm in the early-80s.

Tiki capital T is the first man in creation stories told by the indigenous peoples of New Zealand, Samoa, Tahiti and Hawaii. Statues and carvings of Tiki often serve to mark the boundaries of sacred sites. When Tiki became lower case tiki these carvings were copied and incorporated into cocktail glasses and ashtrays as designers sought to create an exotic island feel. Sacred to profane doesn’t get starker than that.

The turning of Tiki into tiki tells us about the 1940s,’50s and ‘60s American, not the Polynesian psyche. Such spaces offered a counterpoint to the rush-rush, rat race, stressed space age which lived under the constant threat of nuclear war. Sven Kirsten, author of The Book of Tiki, called tiki bars “the emotional bomb shelter of the atomic age.” Before anyone feels too sorry for tiki bar patrons’ let us consider the consequences of such stuff for real-life Polynesian people. Such crass cultural appropriation was not sincere appreciation. Misinterpretations were part of a broader process that diminished and displaced native people, their culture and their inherent sovereignty. The impact of fetishizing island women is particularly problematic.

The longevity of the Landdrost venue notwithstanding, the tiki wave had generally crested and crashed by the mid-1970s.  The American experience in Vietnam made the prospect of remote and tropical seem less idyllic to a new generation. A growing sensitivity to the poor treatment of indigenous people made many uncomfortable with the idea of drinking from a glass shaped like someone else’s Adam and Eve.

There is no bad idea that hipsters haven’t had a go at reviving – which is why tiki is back. Actually, it has been back for a while but Johannesburg has only just noticed. In the late 1990s and early 2000s, a cadre of Californian “urban archaeologists,” started seeking out tiki kitsch as cool. They turned up kava bowls and tiki-head ceramic mugs in charity shops, they opened bars serving flaming pineapple drinks. When challenged on the potential for racism and sexism those defending the tiki new wave argued that what they were doing didn’t feign authenticity so it didn’t count as cultural appropriation.  The argument is that it is appropriation of an appropriation and referencing past racism and sexism is not the same as actually being racist or sexist.

Tiki nouveau advocates seem to be saying that what they are calling tiki is so appropriated that the original is gone. How is this better? The first time around the diminishing of the rights and dignity of those for whom Tiki is sacred took place against a backdrop of displacement and nuclear testing on Bikini Atoll. Tiki round two coincides with a climate change crisis which is already delivering an ecological Armageddon of temperature variability, storm surges, sea level rises and changed in rainfall patterns in the region. Although the South Pacific Islands collectively emit far below 1% of total global greenhouse gases responsible for climate change, the region and its island countries remain among the most vulnerable in the world to its negative impacts. 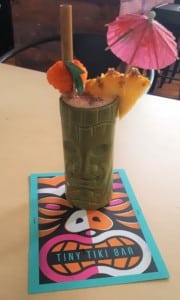 Okay then, so what do we make of the Tiny Tiki Bar in Melville? The décor motif offers all the things that you either love or hate discussed above. There is a picture of a (cute) pig in a grass skirt doing a hula dance, tiki-head cocktail mugs and garlands galore.  The cocktails are well made. Tropical-style drinks can be a nasty syrupy slush but my Zombie cocktail (R80) was refreshing, complex and layered. Sure, it was super strong – it is called a Zombie because if you drink two you will feel like one – but it is supposed to be. There are non-alcoholic versions of all the cocktails for designated drivers.

Co-owner Alex Szabo makes bacon and his work appears extensively on the menu. My friend had a pancake stack topped with rich, sweet, smoky, savoury miso and maple glazed bacon (R70). I ordered the Tiny Tiki Pig Plate listed on the menu as containing pulled pork with black bean rice and plantain fries (R120). When I thought about it afterwards I realized that the promised plantain fries had never arrived and I was sorry because I like plantain fries but the rest of the offering was so good that I didn’t miss them in the moment. Portion sizes are so large that I might have exploded like Mr Creosote had they been on my plate. Service was attentive without being obsequious.

In short, the food and drinks tasted good but the politics left a bad taste in my mouth.

The Coronavirus baking phenomenon and a great cookie recipe

What follows is my favourite chocolate chip cookie recipe. Expect gooey on the inside, crisp on the outside, beautiful biscuits. Great with milk. Even better with a glass or three...

Anna Trapido: SA restaurants in the time of Coronavirus

Of all the economic activity damaged by the novel coronavirus (COVID-19), few have felt its impact as immediately and as deeply as those in the hospitality business. All over the...

First up was prawn cocktail which was served 1960s style with five fat peeled prawns hanging from the edge of a glass. Inside, layers of crisp lettuce met the generous,...