Never eaten à la West Africa before? You are in for a treat. Remember how you felt the first time you tried Thai cuisine? Think back to the thrill of finding flavours that were simultaneously unknown and accessible. That’s how it’ll be as you sit down to West African food at Taste of Africa in Arcadia, Pretoria.

Décor snobs be warned. The restaurant is much more delicious than it is pretty. Cavernous and dimly lit, there is a stainless-steel bar, multiple flat screen TVs and a central dance floor. The tables wobble and the chairs are upholstered in leatherette. Framed portraits depicting a diverse assortment of the great, the good, the infamous and the just plain odd (in approximately equal proportions) fill any wall space not occupied by a television. Try as I might, I could find no logic in the picture placement. British royal Kate Middleton is sandwiched between images of Nigerian Chief Dennis Chukwudebe Osadebey and Cameroonian footballer Samuel Eto. Mozambican President Samora Machel appears beside Christy Walton (the Walmart founder’s widow) and South African child AIDS activist Nkosi Johnson.

It was not the furnishings but the food that brought me to Taste of Africa. Chef and co-owner Fefelille (aka Felix) Okoua came to South Africa from Abidjan in 1998 to work as butler and chef for the Ivorian Ambassador. Now he has left the butteling business and opened this classy yet casual African eatery. It looks like the ambassador and his staff miss chef Felix because Ivorian diplomats were strongly represented amongst the Taste of Africa diners on the evening of my visit. 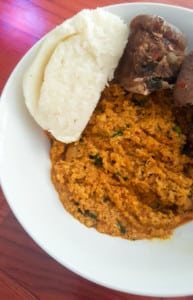 I ordered semo (semolina) fufu with goat stew and egusi melon seed purée (R120). The smooth, light and lovely fufu had the airy texture of steamed bread so I used it in lieu of cutlery to pick up the tender, richly spiced meat, the pesto-textured, umami-laden egusi and the startlingly strong pili-pili. Invigorating, freshly pressed ginger juice stood up to the robust flavours in the food and refreshed my palate.

On the recommendation of Nigerian co-owner Chuma Wilson, I followed my ginger juice with Guinness. Not any old Guinness mind you. Mine host waxed lyrical about the superiority of his stock of ‘real’ Guinness brewed in Lagos over the South African stuff. He was not wrong.  Nigeria’s Ikeja brewery makes what is known as Guinness Foreign Extra Stout which uses roasted sorghum rather than barley and is much more heavily hopped than the original, Irish-style Guinness Draft that is favoured in South Africa. It also has a higher alcohol content – the label says ‘7.5% alcohol content (varies)’, as opposed to 5% in the South African stuff. According to Chuma, the variation is always upwards. It certainly seemed so. Head spinning aside, the stout’s sorghum and higher hop content gave it a beautiful, aromatic peaty punch which went well with the spicy stew. 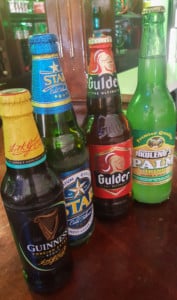 This über-Guinness (R65 per 500ml bottle) is but one of many West African booze options available at Taste of Africa. Whether you want Cameroonian palm wine or Ghanaian Alomo bitters there is a tipple to suit every palate and wallet. Plus, plenty of that other West African favourite; Laurent Perrier. The mark up on the bubbles is approximately 100%.

Night owls take note. Taste of Africa has a license to remain open until 4am which the owners interpret as meaning that if you are in by 4am you can stay as long as you like. The kitchen is open throughout. Big plates of big flavoured food, lots of dancing to doef-doef music and Guinness on steroids as the sun comes up. What’s not to love?