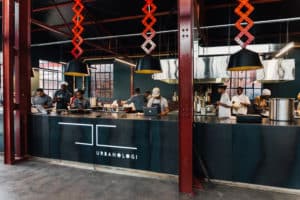 Urbanologi restaurant, at the 1 Fox Precinct in the Johannesburg CBD, is housed inside a recently renovated, late 19th century warehouse. So stylish is the building conversion that it won best hospitality venue in Africa and the Middle East at the 2017 International Restaurant and Bar Design Awards. Legend has it that the first telephone call on the Witwatersrand was made from within its hallowed halls. And now the space (which is shared with Mad Giant craft brewery) is hipster central with iPhone toting types at every table.

Executive chef Jack Coetzee has designed his menu in line with a food philosophy he calls Project 150 whereby he is attempting to source all ingredients within 150km of the restaurant. His aim is to “engage with conscious living and seasonal, sustainable practices around food.” Every menu item is listed with the name of the farm from whence the core ingredients came and the distances required to put them onto plates. Coetzee also has a zero-waste policy so, wherever possible, scraps and offcuts are transformed into other edible offerings.

In truth, not everything served fits the project 150 guidelines. The restaurant uses sugar, flour, spices, chocolate, tea, coffee, wines and spirits that are not produced locally but it seems mean-spirited to pick on the few things that aren’t hyper-local when almost all Urbanologi’s competitors are binging on imported and unseasonal stuff. This is a sincere, and mostly successful, attempt to reduce the menu’s carbon miles.

Portions are small but reasonably priced and the menu is designed with share-share, mix and match across the table type meals in mind. My friend and I enjoyed a delicate duck liver parfait (R45) made with the organs of birds who had previously resided in Delmas (62km from Urbanologi). The accompanying brioche bread was enriched with surplus duck fat (rather than the traditional butter) in line with the zero-waste approach. The beetroot-cured trout sashimi (R95) was from fish farmed in Midrand. At 82km and 92km respectively, the Clydesdale grilled asparagus with goats’ cheese (R105) and cumin-infused Bapsfontein lamb belly (R110) had travelled the furthest to feed us.

Pastry chef Mmathari Moagi’s guava mimosa with lemongrass sherbet (R60) had a remarkable, soothing clarity of flavour. Her poached fig and ricotta mélange (R60) was an exquisitely articulate elegy to the loveliness of late summer. The accompanying coffee-ground tuile biscuit gave textured crunch to the fabulous figs and a second life to what would otherwise have been discarded espresso bi-product.

Urbanologi is well worth a visit and the gripe that follows is a direct result of the team being good. There is a tendency to let mediocre chefs off the hook but faced with skilled, thoughtful and ambitious artists like Coetzee and Moagi, I want them to be better. Because I know they can.

Perhaps I also turn into a language pedant but as I understand it any ‘ology’ (even if spelt with an i) is the study of whatever precedes it. So, Urbanologi should be the study of the urban space in which the restaurant sits. And it is not. The generic industrial-chic interior ticks all the international hipster boxes of exposed pipes and faux graffiti murals but it also has floor to ceiling windows looking out onto Johannesburg Central Police Station and what remains of the city’s first Chinatown. The noodle bar at which George Bizos and Nelson Mandela ate as article clerks is literally a stone’s throw from Urbanologi’s parking lot. The window from whence Ahmed Timol was pushed is right there. There are plenty of Asian fusion elements on the menu but they are all the same Asian fusion frills that one would find on plates in Paris or New York. Johannesburg’s epic Afro-Asian Diaspora experience and flavour repertoire is entirely absent.

Cut to 2019 and there are Mozambican bajias (bean fritters) and Zimbabwean munyemba (cowpea leaves) for sale on every CBD street corner. Zulu ujeqe (steamed bread) vendors compete for customers with Ethiopian injera fermented flatbread makers. ‘Hardbody’ heritage chicken dominates the street food space. Almost all of the above is made from ingredients grown or reared in Gauteng. Much of it in the inner city. The hedges that surround many of the government buildings are grown out of indigenous amatungulu (Carissa macrocarpa) bushes full of foragable fruit. All of the above is invisible at Urbanologi.

The truly, madly, deeply, unique and potentially delicious wonder that is the Johannesburg city centre has been ignored. Urbanologi is a good restaurant. In order to be a great one, the chefs need to go outside and engage with where they actually are.