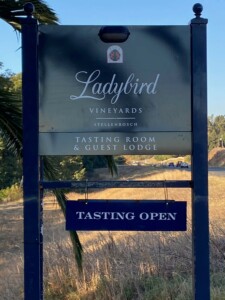 Laibach, the Simonsberg property that was purchased by neighbouring Kanonkop in January this year, will in future be known as Ladybird Vineyards. The new name comes into immediate effect, with the current Laibach wine range to be phased out over the next 18 months, replaced by the Ladybird Vineyards brand of wines made from the property’s 36ha of organic vineyards.

Ladybird Vineyards comprises the original Laibach wine cellar and various other buildings including guest accommodation as well the organically farmed vineyards. The management team of Michael and Anél Malherbe remain on in their positions, as does winemaker Francois van Zyl.

Ladybird Vineyards has Chardonnay, Chenin Blanc, Cabernet Sauvignon, Malbec, Merlot, Petit Verdot and Pinotage under vine. Current vintages will still be offered under the Laibach identity, but from 2023 the range will fall entirely under the labels of Ladybird Vineyards.

The Chenin Blanc Sur Lie from Laibach in Stellenbosch arose from winemaker Francois van Zyl’s ambition to demonstrate that the Simonsberg, a ward renowned for its red wines, could also...