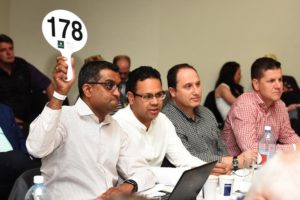 Record sales were achieved at the 32nd Nedbank Cape Winemakers Guild Auction held yesterday, these amounting to R13 833 200 for 2 428 cases, average price per case being R5 697 (average price per bottle: R950), an increase of almost 24% year on year.

84% of the wines were bought by local buyers and Tsogo Sun was the biggest buyer for the third consecutive year with total purchases of over R2.6 million (the hotel group also spending R1.08 million at the recent Nederburg Auction).