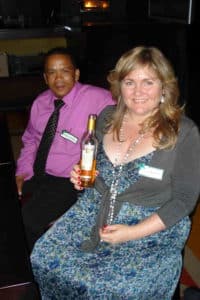 Stellar Winery situated near Trawal in Namaqualand is South Africa’s largest producer of wines from organically grown grapes, processing over 3 000 tons a year. The cellar has a capacity of 6 000 tons (part of production is non-organic) and is purported to be the largest privately owned facility of its kind in the southern hemisphere. Annual production of organic wine amounts to two million bottles,  of which 30% are “no-sulphur-added”, making it the world leader in this regard.

It was built in 2000, and when the workers involved were asked if they would like to take up positions with the winery, Berty Jones swapped careers and is now cellarmaster. “In our commitment to sustainability, we even re-cycle people,” said co-owner Lee Griffin at yesterday’s Nedbank Green Wine Awards 2011.

The Stellar Organic Heaven on Earth Natural Sweet won best in category in the Green Wine Awards. It is from Muscat’d Alexandrie, partially dried on straw and rooibos, and there’s a definite hint of the fragrant herb on nose and palate. The wine is very concentrated and syrupy, and while it rated a worthy Four Stars, I think slightly crisper acidity would make it an even better wine.

The 30th Nedbank Cape Winemakers Guild Auction takes place at the Spier Conference Centre, Stellenbosch on Saturday, 4 October 2014. There are a record 62 wines on offer and I...