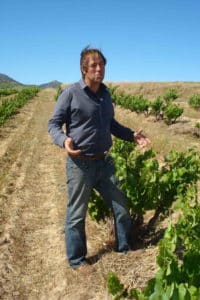 The man with a plan.

Hardly have we finished exchanging greetings and Eben Sadie, responsible for the acclaimed Swartland wines Columella and Palladius says “I’m not interested in winemaking anymore.” Noting a quizzical look from me, he adds a qualification: “I still want to know what’s going on in the cellar as I don’t want to lose a wine but it’s in the vineyards where greatness is achieved”.

An appointment with Sadie would not be complete without at least one vineyard tour and it’s off to see the 78-year-old block of unirrigated bushvine Chenin Blanc that supplies some of the grapes for Palladius, the 2009 vintage having just been rated 5 Stars in Platter’s. Yields are low here: he shows me one particular vine bearing a mere four bunches, each bunch potentially weighing 100g at harvest. “Four hundred grams of grapes makes 200ml of wine. That means more than three vines to make the equivalent of one bottle of wine.”

Every winter 30 cubic meters of compost are worked into the 1.5ha vineyard while some 800 bales of hay are used as mulch on the basis that these old vines need “all the organic material they can get”. Sadie professes not to know what Palladius retails for (over R400 a bottle) but if he previously had to skimp on production, he’s not compromising now.

Total production of Palladius is 10 000 bottles and while it is Chenin-led, it includes multiple other varieties, Sadie rattling off the following: Grenache Blanc, Roussane, Viognier, Clairette Blanc, Verdelho, Semillon Blanc, Semillon Gris and Chardonnay. “Because of how the industry was structured during the 20th century, we’ve been left with these old white wine vineyards and it’s taken me until to realise that I need to work with all of them. You could say Palladius is a product of me evolving as a person”.

Vine plant material is a Sadie pre-occupation at the moment. “We’ve populated the New World with five or six varieties to the exclusion of all others and I just don’t understand how that’s conducive to bringing forth terroir.” Towards solving this, he’s investing time with the likes of KWV and Vititec in the development and production of new varieties. “Until we’ve got interesting grapes in the ground, it’s not worth having the dialogue about how well we’re expressing our terroir.”

His instinct, though, is the Swartland is the district with the potential to make South Africa’s most profound terroir-driven wine. “It’s pointed out that land is cheap in the Swartland but when your farming at one ton a hectare that changes the whole economy. Whites, as with reds, need 18 to 24 months in barrel before you can release them. That requires a different approach to farming Sauvignon Blanc at 12 tons a hectare which you can put on the market inside 11 months”.

Sadie is also co-owner of vineyards in Priorat, Spain and he bluntly points out that he’s not farming in the Swartland because it’s the only place he can afford. Rather he describes it as a “great wine place – great soil, great climate, great people”, the human factor being a significant part of terroir for him.

There’s plenty of hype about the Swartland at the moment but bar the efforts of Sadie and a few other notable personalities such as Adi Badenhorst and Chris and Andrea Mullineux, are the wines really up to scratch? It could be argued that large-volume operations such as Riebeek and Swartland are underperforming given the vineyard resources they have access to, for one thing. “Look, I’m out laying down some markers and I’m not going to wait for everyone else to catch up but those big guys will have their day,” says Sadie, pointing out that Swartland cellarmaster Andries Blake is just as much inclined to take part in activities such as the recent Swartland Revolution as anyone.

However, Sadie reckons that what really demonstrates the dynamism of the Swartland is happening at the other end of the scale. “During the Swartland Revolution, we had this tasting featuring wild-ferment wine from a whole bunch of producers who are not even officially registered. How many other areas can say that?” he says, before name-checking the Rall and Tobias labels in particular.

Whether Sadie likes it or not, he’s going to be the local figure attracting all the attention for a while longer. What are his aspirations for the future?  In a sudden moment of humility, he admits that he finds his situation rather overwhelming. “There are times when I feel I’ve just arrived here. We’re still busy with the most elementary experimentation. It scares me shitless”.

Not one to doubt himself too long, he recovers quickly. “I’ve given up technical winemaking for vineyard winemaking and the rewards seem better. I have my own cellar buildings and a bakkie… But now’s not the time to consolidate. Now’s the time to go all the way.”