Chardonnay: The chameleon of viticulture 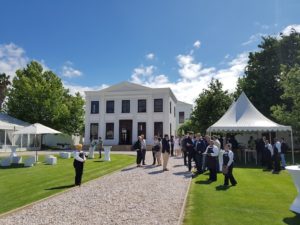 De Wetshof – venue for the biannual Celebration of Chardonnay.

Jay McInerney, the keynote speaker at this year’s Celebration of Chardonnay hosted as always by De Wetshof, is a US writer who made his name with a 1984 novel entitled “Bright Lights, Big City”, which features “a cocaine-using party-goer seeking to lose himself in the hedonism of the 1980s yuppie party scene”. What would the audience make of his address?

I think McInerney brought a particularly literary take on all the inherent puzzles and paradoxes of not just Chardonnay but wine appreciation in general. In Burgundy, he pointed out site matters more than the variety, Chardonnay becoming a “conduit between the subterranean world of geology and the solar system”. In the New World, meanwhile, it is often considered “a tabula rasa, a blank slate on which the winemaker can express himself and his vision”.

To McInerney, Chardonnay is the “great chameleon of viticulture” capable of many different but equally valid stylistic expressions. “It ranges from lean and stony to opulent and tropical; metaphorically speaking it runs the gamut from Marilyn Monroe to Twiggy, from anorexic to sumo wrestler, from raw oysters to poached lobster, from Zen to Baroque, from Botero to Modigliani”, he observed.

Is the above down to terroir or the role of the winemaker? Lovers of Burgundy (and McInerney, needless to say, is such) “find that a wine made from a certain plot tastes noticeably different from one made for another plot which may be only yards away” and this is what is fundamentally at stake – site is more fundamental than variety, a consequence of this being that “Chardonnay is a grape but not a wine”.

He does admit, however, that terroir can become “muddied” by winemaking but he makes the point that whereas the Grand Crus of Burgundy look clearly different next to each other they start looking a lot more similar when tasted next to opulent Sonoma, this for bearing out the notion “terroir” even more.

But terroir is not absolute for him, with him pointing out that “as the planet warms, white Burgundy vintages like 2003, 2005, 2009 and 2015 in some ways resemble those from traditionally warmer region”.

Then, of course, there is the role of fashion and the radical turn away from ripeness that currently is afoot in America. “The new buzzwords… are lean, balanced, focused, and nervous”, he says. “Any adjectives associated with anorexia have become positive descriptors for fashionable Chardonnay and you hear winemakers bragging about picking at brix that barely reach double digits. Wine growing regions like Napa and the inland portions of the Russian River Valley are now deemed too warm for really produce cutting-edge Chardonnay. Winegrowers in search of cool-climate Chard are moving closer to the Pacific, to the chillier reaches of Sonoma and Mendocino and the Anderson Valley. The new wisdom seems to be that any place warm enough to justify the construction of a swimming pool is too warm for Chardonnay.”

McInerney is in favour of this trend, but only up to a point. “When the acidity starts to shrink my entire face and I’m getting a strong note of stainless steel, my inherent hedonism kicks in and rebels.  I mean, come on, we all like a little fruit in our white wine, don’t we?” he says.

After the address, a tasting of some of South Africa’s best examples next to some world benchmarks. Our wines are very, very good but there’s still more of a sense of successfully executed winemaking strategy than Chardonnay as “transparent medium of site” to use another McInerney turn of phrase.