So just how good are the Hemel-en-Aarde Pinot Noir 2014s as shown at the area’s recent Pinot Noir Celebration? Top of the pile for me were Domaine des Dieux Josephine, Newton Johnson Family Vineyards and Storm Moya’s which I rated 92/100 followed by the Storm Vrede on 91/100 (see an overview of proceedings here).

This caused Greg Sherwood MW and guest speaker at the event to comment on Twitter: “Perhaps a point shy on both Storm wines?”

There was certainly a lot of excitement in the air about how far Hemel-en-Aarde Pinot has come (it was 1975 that the late Tim Hamilton Russell purchased the undeveloped property that was to become Hamilton Russell Vineyards and 1991 that his son Anthony narrowed the range to just Pinot Noir and Chardonnay). Equally, there was a smattering of sour grapes towards Burgundy – the stuff of any consequence now beyond the reach of the normal punter.

Following the Hemel-en-Aarde dedicated tasting on Friday afternoon, a number of smaller workshops took place on Saturday morning and I attended the tasting presented by Hannes Storm featuring “a personal selection of some of the greatest Pinot Noirs from around the world” – 10 wines from France, New Zealand, South Africa and the United States of America tasted blind (see here). 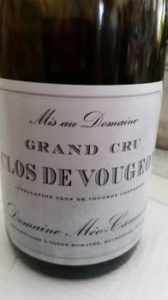 The stand-out wine of the line-up was the Domaine Méo-Camuzet Clos de Vougeot Grand Cru 2011. A subtle and complex nose of red fruit, earth and spice. Incredible flavour intensity without being at all weighty on the palate – a real sense of umami. Wonderfully well proportioned with vibrant acidity and super-fine tannins. It really did put the Hemel-en-Aarde offerings of the previous day in perspective and I rated it 95/100.

Two further points: While Hemel-en-Aarde Pinot (and South African Pinot) is no longer a curiosity (a point made by Sherwood at the event), it is still not as accomplished as Stellenbosch Cabernet or as exciting as Swartland Shiraz, bottle for bottle. Secondly, while Storm, Finlayson of Crystallum and Smith of La Vierge are new-wave producers who show signs of taking local Pinot to the next level, I am quite sure that they have yet to make their best wines and over-scoring what has been released to date is therefore not helpful.