Game on – SA wine now ready to compete with the best

There can be no greater sign of the confidence that South African winemakers have right now than their willingness to pitch their handiwork against international benchmarks when presenting to trade and media, something that was very much the exception rather than the rule even 10 years ago.

When Andrea and Chris Mullineux released new vintages of their Leeu Passant wines a few weeks ago, they poured their Stellenbosch Chardonnay 2016 next to Au Bon Climat Santa Barbara County 2015 (USA) and Henschke Croft Adelaide Hills 2015 (Australia). I rated the Leeu Passant 94 points on the 100-point quality scale, equal with the Henschke and ahead of the Au Bon Climat on 93.

Next they had their Dry Red 2016 together with Tenuta San Guido Sassicaia Bolgheri 2012 (Italy) and Domaine de Trevallon Alpilles 2014 (France). The Sassicaia was looking spectacular on the day and I had it out in front on 97 ahead of the Leeu Passant on 93 and the Trevallon on 91 – the Leeu Passant might have come second to the iconic Sassicaia but I was more inclined to admire the pluck of the Mullineuxs for putting their wine up against the icon that is Sassicaia than consider it in any way diminished.

Yesterday, Ian Naudé, formerly of Adoro and now going it alone, did a similar exercise showing current and older vintages of his own-label wines against a few noteworthy foreign counterparts in a blind tasting environment. In the first flight, the 2013 and 2015 vintages of his Old Vine Chenin Blanc were served next to Thierry Germain Domaine des Roches Neuves Saumur L’Insolite 2012 (France). I had the L’Insolite on 94 ahead of Naudé’s 2013 on 93 (this has come on extremely well since first tasting it in August 2015) and his 2014 on 92.

This was followed by the 2014 and 2016 vintages of Naudé’s Semillon up against L’Esprit de Chevalier Pessac-Leognan 2012 (France). The latter, for the uninitiated, is a Sauvignon Blanc-Semillon blend while Naude’s wine probably bears more resemblance to Hunter Valley Sem but unfortunately none of this was readily to hand. I liked the Naudé 2016 most, rating it 93 points ahead of the L’Esprit de Chevalier on 91 and the Naudé 2014 on 90, the latter with an alcohol of only 11% looking relatively “green” by comparison to the other two wines.

In the third flight, the 2014 and 2015 vintages of Naudé’s Old Vines Cinsault from a Darling vineyard planted in 1975 alongside Birichino Bechthold Vineyard Cinsault Lodi 2016 (USA) from vineyards some 130 years old! I rated Naudé 2014 92, Naudé 2015 91 and Birichino 90. All rather pretty wines but once again, how much to expect from this variety? 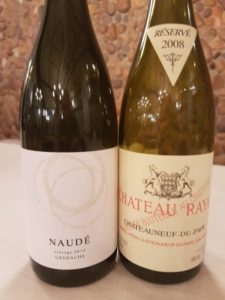 Finally, the Naudé Grenache 2014 poured next to Chateau Rayas Chateauneuf-du-Pape 2008 (France). A difference in vintage that was plain to see, clearly both wines of some pedigree, but the wine made by Naudé from a relatively young Swartland vineyard looking rather splendid – I rated it 94 and the Rayas 92. SA wine really has come a long way.

The Werfdans Old Vines Cinsault 2016 is astonishingly good – this variety often makes quite modest wines but winemaker Ian Naudé has managed an unusual amount of complexity in this...

What’s up, Old Vine Project? According to GregSherwood.com, the Langpad Old Vines Colombard 2020 as made by Ian Naudé is from a 1985 vineyard whereas the bottle I purchased has...