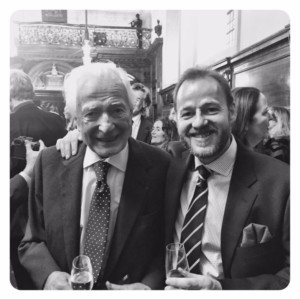 There are certain moments in time where you have no choice but to sit back and reflect on the impact something or someone has had on your life, on an industry or even on the world as we know it. March 2020 has certainly been one of those months. No, I am not actually referring to Covid-19, the new illness that can affect your lungs and airways, brought on by the pervasive Corona virus, though I might come back to that later. I have actually been in a very reflective mood after the passing of Michael Broadbent MW in mid-March. Born an age ago in Yorkshire in 1927, Michael lived an incredibly colourful life, most of which was fully immersed in the world of fine wine. Well, I say “fine wine… but of course there was no such thing back in the 1950s and 1960s, there was just… “wine.”

After being in the Royal Artillery from 1945 to 1948, Michael joined the prestigious Laytons Wine Merchants as a trainee in 1952 aged 25, where he officially started his epic 68-year career in wine. Further brief stints at Saccone & Speed led Michael to joining John Harvey & Sons Ltd in Bristol in 1955, the originator of Harvey’s Bristol Cream sherry, where over several years he worked his way up to the position of UK Sales Director. Michael passed the prestigious Master of Wine exams in 1960 and a few years later joined Christie’s in July 1966, where he was responsible for starting Christie’s wine auctions, which he conducted worldwide. Until 1992 he was the senior director of Christie’s wine department and remained a consultant with the firm until 2009.

While reflecting on Michael’s career, it is impossible not to ponder the vastly different world at the time he started his journey into wine. Certainly pre and post-world war II, and equally for decades afterwards, wine was pretty much the sole preserve of the elite upper classes in the UK. There was no mass market wine drinking culture at all. It simply did not exist. Of course plenty of alcohol was being consumed as a nation, but this was primarily confined to beer, ale and spirits. Wine did not really enter the collective cultural psyche of the UK until the late 1970s, and even then, it was still the beverage of choice for a very small educated clique. But it is undoubtedly this deeply complex historical evolution of the wine market in the UK (and globally) that helped pique my own early interest in wine and feed my ongoing fascination with this great industry. Afterall, few other commercial categories of business encompassed so neatly so many different building blocks as my passion, wine involving history, geography, social psychology and agriculture, to name but a few.

All generations have their own “wow” moments that they can look back on and nostalgically mark points in time where the world as they knew it would never be the same again. The invention of the telephone, the emergence and commercialisation of the motor car, the expansion of commercial air travel and the introduction of the television to name but a few. What of course these all have in common with wine is that however niche these products were to begin with and however small and elite the groups of early adopters were, these activities, products and services would all eventually grow to become everyday parts of our lives. I myself, who at 48 can hardly be considered “old”, can starkly remember the early 1980s and how little wine featured in broader society. A slightly older generation will perhaps recall more lucidly the newly emerging wine bars in the City of London in the late 1970s and early 1980s where chilled Muscadet sur Lie flowed at lunch times like its modern day equivalent of Pinot Grigio. But it was all still pretty basic. For decades to follow, bars, pubs and restaurants would still only serve dry, semi-sweet or sweet red and white wines with no reference to variety or country of origin.

Many entertaining observations have resurfaced among wine trade friends and colleagues as we remember the life of Michael Broadbent MW. Indeed, one fellow Master of Wine enjoyed pointing out this week that it was none other than Michael in the 1970s who remained adamant that wine would never catch on in the supermarkets! But I suppose to be fair, it is not that easy to predict consumer trends in a product category that is continuously held up as an example of one the slowest to evolve in terms of packaging and closures if not contents. My personal journey into wine always gravitated inherently towards the luxury end of fine wine where the stories behind the winemakers, the brands and winery owners were the most elaborate, intricate and intriguing. This was also the rarefied world of Michael Broadbent and so it is hardly surprising that he would ultimately become one of the most important influences in my own early wine trade career along with other living greats like Steven Spurrier and Hugh Johnson.

The younger generation of the wine trade often contemplate who the next generation of influencers will be. But in many ways they miss the point. The modern wine world has already been created and shaped by the likes of Michael Broadbent, Hugh Johnson, Steven Spurrier, Jancis Robinson and Oz Clarke. You can only invent the wheel once and from there on in, it merely becomes re-engineering, reshaping and fine tuning. While you can only discover a continent once, I suppose it does open up the rivers and plains of knowledge for subsequent generations of explorers to navigate further and in greater detail. Another certainty is that when the current worrying times we are experiencing with Covid-19 and Corona virus are over, things are also unlikely to ever be quite the same again in business or broader society. As new words like “lockdown” and “self-isolating” enter our daily jargon repertoire, let’s hope that whatever brave new world emerges post the Covid-19 era, it will be a better one for all.