Has Steenberg gone to market too early with Magna Carta 2015? 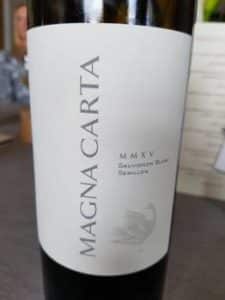 John Loubser, MD of Steenberg, relates that the Constantia property pioneered a Bordeaux-style white blend under the Catharina label from 1999 until 2001 but it was ahead of its time and did not get enough traction in the market. The likes of Vergelegen and Cape Point Vineyards persisted with Sauv-Sem combos through the 2000s and in 2007, Steenberg joined the fray again with Magna Carta.

The brains trust at Steenberg have realised that because of their location, their best wine is going to be a white and I think they have always desired icon status for Magna Carta. This is not easily achieved but to the credit of all involved, they’ve realised that they need to stick it out.

How many producers are putting wines aside and creating libraries in order to have a meaningful debate about older vintages? The 2007 is still very much alive and with a total acidity of 6.7g/l and a pH of 3.05, it will probably be with us for ever.  It is a fascinating if not exactly pleasurable wine – complex yet severe. In a way, this wine has become quite binding in terms of how to progress Magna Carta, Loubser and Pretorius seemingly wrestling with how to replicate that complexity but escape the severity in each subsequent vintage.

The 2009, which contained some Durbanville fruit, is probably the least successful to date. The total acidity here is 8.g/l and as you might imagine, it’s eye-watering to drink. The 2010 is rich and full, perhaps the most forceful to date, while the 2011 and 2012 are very accomplished, both having a cohesiveness and completeness about them.

On to the 2015, a blend of 60% Sauvignon Blanc and 40% Semillon, the latter fermented and matured for two months in 500- and 600-litre barrels. After blending, the wine was returned to barrel, maturation lasting a further seven months.

I’ve always contended that producers should release wine as early as possible thereby allowing consumers to decide for themselves when they prefer to drink it but Magna Carta 2015 is terribly young. On the nose, there are some dusty, pyrazine-related notes as well as flowers, lime and white peach. The palate currently appears light, even delicate, despite an alcohol of 14%. It comes across as extraordinarily primary and perhaps still a little unresolved.

The wine sells for R525 a bottle but total production is a modest 500 six-bottle cases so no great financial pressure to release early for an operation of Steenberg’s size. The issue is rather that having held back on 2013 and 2014, Loubser and co. did not want to lose momentum in the market place.

There are business realities that every producer needs to contend with but Magna Carta 2015 is way off showing at its best – the 2012, for instance, is currently at a really good stage of its development, the palate nicely filled out but the flavour spectrum by no means too developed.

Through Magna Carta, Steenberg has done much to establish Bordeaux-style white blends as a category locally, the quality of which is generally excellent (results of the fourth annual RisCura White Hot Wine Awards as convened by winemag.co.za and featuring these wines are released tomorrow).

Even so, some will ask the question: Is Magna Carta among the best of its kind in South Africa? In some ways, it is now starting to escape its fellows and become truly a terroir wine. As such, it is a key reference point when considering the state of South African fine wine and should be sought after by every serious collector. Just don’t drink the 2015 anytime soon as you’ll be getting something akin to expensive Sauvignon Blanc rather than the particular and memorable wine that is Magna Carta in its pomp.

After all the drama and intrigue of the Catharina Ustings story, is Steenberg’s next chapter a bit of an anti-climax? Far from it, in my opinion. Again, let’s start with what...