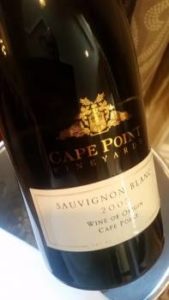 “Why are top-end red wines so much more expensive than white wines when they essentially cost the same to produce?” was the question posed by acclaimed Swartland winemaker Eben Sadie before yesterday’s tasting of seven local whites 10 years or older convened by South African Sommelier Association. “We’re all inclined both to spend more on red and mature it for longer and there’s zero logic to this – Madiera, Jerez, Mosel Riesling and Loire Chenin are some of the most long-lived wines in the world.”

In attempting to explain this state of affairs, Sadie suggested that the modern-era marketing drives undertaken by the three red-wine producing regions of Bordeaux, Tuscany and Napa, California had basically dictated terms.

Sadie felt the supremacy of reds was not something that the South African industry should easily subscribe to, however. “Our top 50 whites are probably more impressive than our top 50 reds in a global sense,” he said. “If I knew when I started out what I know today, I would never have priced Palladius disproportionately to Columella.”

Even so, the line-up, curated by Sadie himself, was quietly impressive rather than OMG-Wow-Amazing. Tasting notes and ratings as follows:

De Wetshof Finesse Chardonnay 1993
Ethereal nose of citrus, flowers, a certain chalkiness and some leesy character. Pure and focused on the palate with a long, pithy finish. Still extraordinarily youthful but not particularly detailed.

Hamilton Russell Vineyards Chardonnay 2001
Deep amber in colour. The nose appears particularly developed with notes of marzipan, oatmeal and nuts but the palate still shows good fruit. Rich and weighty with tangy acidity. Very much tertiary in character but complex and engaging.

Vergelegen White 2005
70% Semillon, 30% Sauvignon Blanc. A herbal top note before lime as well as undercurrents of green bean and asparagus plus oak-derived vanilla and age-derived honey. Still very much together but lean and perhaps a bit joyless.

Boekenhoutskloof Semillon 2004
Stone fruit, some earthiness and subtle spice on the nose and palate. Rich and broad with moderate acidity and a savoury finish. A real sense of this wine being untarnished by time and set to remain on a plateau of drinkability for a long while.

Palladius 2005
A blend of Chenin Blanc, Grenache Blanc, Viognier, Roussane and Chardonnay. Notes of cut apple and spice on the nose and palate. Rustic but pleasingly so – broad on entry but comes to a point.