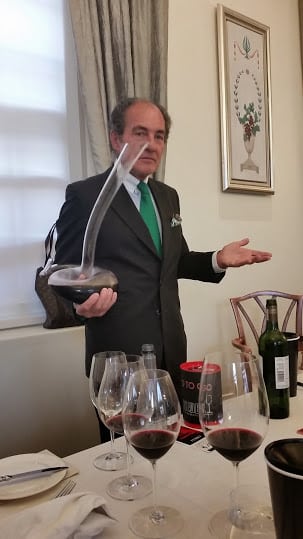 There’s an imperious air to Georg J Riedel but this is perhaps understandable as he is the 10th generation of his family to be involved in the production of luxury glassware, the company which today bears the family name having its origins in 1756.

“Our glasses are to wine as loudspeakers are to music,” says Riedel and clearly a lot of people believe his claim that his stemware is essential to having the most complete wine drinking experience. Riedel currently produces 55 million pieces a year with turnover amounting to € 240 million. The company employs a workforce of 1 200 and operations include a factory in Austria as well as three in Germany. Major sales and marketing subsidiaries exist in Australia, Canada, China, Japan, the United Kingdom and the USA and a further 120 or so countries are serviced.

The Riedel proposition is essentially that wines from different grape varieties require different glass designs. Bowl shape, size and rim diameter influence the delivery of the liquid to the mouth – the wrong glass emphasising negative attributes, the right glass positive ones.

On a recent visit to South Africa, Riedel does a demonstration with three glasses from the Vinum XL range – a Pinot Noir glass with a little lip to the rim, a Syrah glass with a narrow diameter and a Cabernet Sauvignon glass with a big bowl and wide diameter.

First, the audience has to drink water – tasteless and hence used to demonstrate how the different glasses deliver to different parts of the mouth. The Pinot Noir glass with the lip makes the tongue tip curl forward and the water reaches the front of the palate; the Syrah glass compels the drinker to tip his or her head backward and the water goes to the back of the mouth and from the big, open Cab glass, the water hits all over the palate offering the greatest satisfaction.

It was Riedel’s father, Claus J, who pioneered the design of different glasses for wines from different varieties in the late-1950s. Georg, who was born in 1949, joined the company in 1973 as an accountant and became chief executive in 1994 and a large part of the company’s success is evidently his hands-on involvement with him touring the world leading demonstration tastings.

“I enjoy travel to a certain extent but it’s really part of how we go to market – I need to get that involvement of the drinker with our glasses,” he says and he’s nothing if not a showman. To attend a tasting is a dizzying affair, first water and then various wines poured into one glass after another, Riedel all the time issuing curt instructions and reprimanding members of the audience should they deviate from the prescribed order of events.

“We’re dealing with physics,” Riedel keeps insisting but is there any real science to it? A Pinot Noir out of the three different Vinum X glasses does seem to present in significantly different ways. Out of the Syrah glass, it appears “grey”, which is to say unduly savoury. Out of the Cabernet Sauvignon, “green” or stalky. Out of the purpose-built Pinot glass, “red” with notes of cherry and raspberry to the fore. Then again, it could just all be the power of suggestion.

If you’re more or less sold on the idea that glasses do change the way your wine smells and tastes, which Riedel should you opt for? At the top of the pyramid sit the mouth-blown glasses and decanters, accounting for about 3% of production. This is for the seriously wealthy wine lover – Riedel South Africa offers the so-called Sommeliers Range white wine glasses at R795 each and the reds at R895. Shop down (sort of) and you can get the machine-made Vinum whites for R295 and the reds for R395.

At those sort of prices, you’d hope that your glasses would offer reasonable durability. “We make a restaurant range which are thicker and more robust but equally more clunky and I believe not as appealing,” says Riedel. “I think the lightness of the glass is an important factor of enjoyment. A glass doesn’t break on its own but because of mishandling.” As for the best way of cleaning your Riedels, he advises that “21st century dishwashers do a really good job”.

Although Riedel suggests in an off-hand moment that when it comes to red wines, you only really need three glasses – a Pinot Noir glass, a Cabernet Sauvignon glass for Cab and Bordeaux blends and a Syrah glass for just about everything else, a myriad of custom-built glasses exist. If Argentina has a Riedel specifically for its Malbec, then why doesn’t South Africa have a glass for Pinotage? “It doesn’t depend on us,” says Riedel. “Producers must want it and then there must be a minimum demand before we go into production – the smallest run we can accommodate is 7 500.”

Perhaps the South African wine industry will finally have come of age when it has a dedicated glass for Pinotage by Riedel. But it probably won’t be developed by Georg. While he remains owner of the company, he retired from active service this year and is handing over to his son, Maximillian, now aged 37. “I love wine. It’s my greatest passion and I’ve been very lucky to make wonderful shapes for this fabulous beverage,” he says.

If you look carefully at the bottom left-hard corner of the photograph to the left (an inset of the original photo gives the context), you will see part of the...

A recent discussion on this site’s comment section brought up another chestnut of the wine world: decanting. It was nothing new: heartfelt support versus moderate skepticism. It dawned on me...

From the December issue of GQ: As with everything in wine, decanting is more complicated than you think. Yes, pouring wine out of its bottle into a specially designed container...