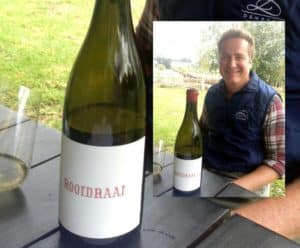 If you look carefully at the bottom left-hard corner of the photograph to the left (an inset of the original photo gives the context), you will see part of the bowl of a wineglass at a rather odd angle. And surprisingly close to the table top. The clue to an explanation lies in the slatted top of the table or, more exactly, the spaces between the slats: they are just wide enough to take the very slender stem of an unusually elegant wineglass – one from which the foot has been snapped off. A winelover of any length of experience is bound to recognise the idea of such a vitally damaged glass, and will feel a sympathetic twinge of anguish.

Especially when the glass is as expensive as the Zalto slotted into the tabletop by winemaker Lukas as Loggerenberg, shown here at the modest launch a few years back of the Carinus range, which he makes in addition to his own brand. Lukas was not in a financial position to simply throw away the damaged glass (almost useless unless you also have a regular supply of slatted tables to hand), hence the expedient. His guests had whole glasses, by the way. Ones with feet intact. (Glasses, I mean – not guests, though they too, as I recall.)

Fashions can be odd, but sometimes explicable. Just about all the new-wave winemakers I know have their sets of the lovely, airily lightweight Zalto glasses – mostly frequently the Burgundy shape. I strongly suspect that they choose this shape for their red (and white wines) rather than the Universal one, let alone the Bordeaux model, not because it suits the wine better, but because Burgundy is inspirational for their own winegrowing. If not the Zaltos, then the Gabriel Glass – which, however, comes in only one shape, closer to the “Universal”, but in two qualities, one handblown like the Zaltos and as airy, the other not. Most unusually, local prices for the Gabriels seem very good and, at about R450 each, the finer ones are quite a bit less costly than the Zaltos something over R700, and of much the same style and quality (so I use them myself – I have some of the slenderer ones for rare grand occasions or grand wines, the cheaper – R150ish – standard ones for everyday).

On the other hand, I suspect, on flimsy evidence, that many of the older school of winemakers (and winelovers), if they go for very expensive glasses, will choose to stick to the weighty name of Riedel, which has been around for so much longer. While Zalto’s range of glass-shapes seems to be expanding, it can’t begin to compete with the rather bewilderingly vast array of Riedels for different grape varieties and wine-styles, and at different quality levels but all expensive or extremely expensive. It’s undoubtedly rash of me to associate Riedel with Bordeaux and plush conservatism, and link Zalto to more fashionable Burgundy and the new-wave terroir aficionados, but I do … at least tentatively.

One weird thing, in fact, is that even those who have undergone a Riedel demonstration of the substantial effect of glass shape on wine-drinking experience are capable of walking away with their preconceptions shattered yet returning to using just one or two different glasses for all their drinking. I’ve done it myself – twice. The last time, I was so convinced by the superiority of a good white burgundy in the appropriate glass, when compared with other apparently plausible Riedels, that I swore I was going to buy it. I still haven’t – but, then, I so seldom drink good white burgundy…. Apart from my Gabriels, I do have glasses marketed as ideal for one style/variety: Speigelau glasses for burgundy, a mix-up of Spiegelau and Riedel for Bordeaux, but they pretty seldom get an outing.

For those others that want a one-shape-supposedly-fits-all glass, there’s quite a choice apart from the Gabriel I mentioned, and (presumably) the Zalto Universal, both easily available in South Africa. The latest to make headlines in our little wine world was one from Jancis Robinson, whose signature appears on the glass together with that of the designer, Richard Brendon. I must say I was sorry when it was brought out (with a lot of fanfare from Jancis), because it meant that she was no longer one of remarkably few wine writers without a crudely commercial sideline to supplement the income derived from her pen. But the glass looks lovely – its bowl rather more rounded than those of the Zalto and Gabriel. Not yet available here, as far as I know, but I suspect it soon will be, at a hefty price.