Is there a more crucial positioning statement than price?

Those who have been following the South African wine scene for a while will remember that the winner of the 2007 Chenin Blanc Challenge as convened by Wine magazine while still in print was the unheralded Val du Chêne 2004 from producer-wholesaler KWV. The wine, which sold for the princely sum of R45 a bottle, pipped the FMC Forrester Meinert 2004, at R220, into second place. Oh, the howls of outrage. 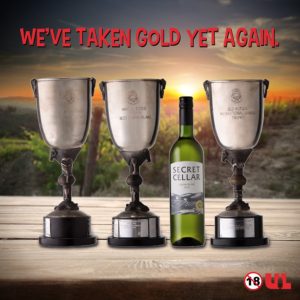 Not unlike the situation playing itself out now with regards the Secret Cellar No. 235 Chenin Blanc 2015 from Ultra Liquors, available for R35 a bottle, purchases limited to three bottles per customer. This wine not only won the Harold Eedes Trophy for best in class at the recent Old Mutual Trophy Wine Show (see full results here) but also the trophy for the wine scored collectively highest by the three international judges as well as the trophy for the best value gold medallist.

So how did Secret Cellar come out tops? First of all, any wine under this label is hand-selected by the seasoned Mark Norrish, GM of Ultra Liquors wine division, these being drawn from cancelled export orders, end-of-label runs, excess stock to producer requirements or discontinued lines. That there is no acknowledged farm or personality behind these wines loses some of the romance punters ideally want but it’s difficult to argue with the price…

Then again, is there a more crucial positioning statement than price? Disbelief in many quarters that Ken Forrester (that name again) could be so brazen as to charge R950 a bottle for his newly released Dirty Little Secret Chenin Blanc 2015 but apparently some think R35 a bottle for Secret Cellar is too good to be true.

Stylistically, the Secret Cellar reminds me a lot of that KWV Val du Chêne being elegant and understated to the point of dainty. If you’re looking for weight and power, then you’re not going to find it here. Once again, the diversity that Chenin provides as a variety is both its strength and its weakness.

What really is alarming about the Secret Cellar is a  is that it raises the question as to why high quality Chenin Blanc is still not moving through the market on its own merits. Is Ultra-Liquors making money? No doubt they are. Small margins, big volumes but whoever sold the wine to Ultra must have been dire straits. As ever, making decent vino is just the first step. Producers also need to pay careful attention to distribution as well as sales and marketing. In the meantime, the the Secret Cellar No. 235 Chenin Blanc 2015 is “house white” at Chez Eedes…