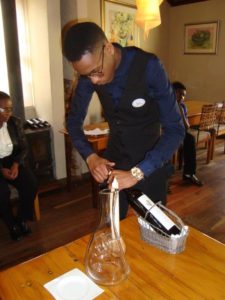 Michael Fridjhon’s recent article highlighting the up and downs of sommeliers culture in South Africa was a useful reminder to us all that very few sommeliers are properly certified, and even fewer of them actually carry the cheque book. However, it is worth noting that this is a global reality: less than 10% of certified sommeliers worldwide actually have buying powers, while the balance are left to “suggest” beverages to their F&B managers.

I agree that too many wine waiters who can barely spell cabernet sauvignon tend to proclaim themselves sommeliers. The journey of my colleague Gareth Ferreira [currently head sommelier at London restaurant Core by Clare Smyth] is a good example to show how much work is required to achieve the appropriate qualification and the recognition which comes from it. However, on the educational side, the world of sommeliers in South Africa is far more active than most people realise, and we are building up a real future for decent wine service here.

Two years ago, the South African Sommelier Association (SASA) board identified the dire need of structured education. It also recognised that SASA lacked the resources to provide education and certifications. Accordingly some board members created the Sommeliers Academy to organise the educational side, leaving SASA free to be the certifying body of the Sommelier exams. I stepped off the SASA board to manage the company and avoid a potential conflict of interest. At the same time it allowed me to compete internationally, since Gareth does not compete for SA anymore. I represented South Africa at the Best Sommelier of Europe and Africa competition in 2017. I aim to qualify for Best Sommeliers of the World 2019 but competition will be tough on the domestic front.

Unfortunately The Court of Master Sommeliers (CMS) is not active in SA. We do have five Certified members of the Court in the country, of which some are shareholders or facilitators of the Sommeliers’ Academy. While the CMS is mostly active in English-speaking countries, it is not the only reputable international certification available. SASA and Sommeliers Academy have elected to follow the more international route of the Association de la Sommellerie Internationale (ASI), an association present in 56 countries. ASI organises the international competitions Gareth and myself attended, and has developed a global benchmark examination: the ASI International Sommelier Diploma. The exam is organised once a year on the same day around the world, and this year 18 countries, including South Africa, hosted an exam centre. I am currently the only holder of an ASI Diploma in Africa, but I wish more will be certified soon.

SASA has developed two ASI-endorsed qualifications, the Wine Steward/Junior Sommelier Level 1 and the Sommelier Level 2. The ASI International Diploma is level 3 (an equivalent level between CMS Advanced and Master Sommelier). As a result, SASA certifications are recognized in all the countries associated with ASI. This decision means that wine waiters working within SASA-recognised structures can conduct their training following internationally recognized practices, without having to travel to the UK or the USA.

The Sommeliers Academy attempts to bridge the gap holding back would-be wine waiters who are dedicated to their work but lack prior learning. It has developed the Wine Ambassador Certificate which addresses most of the soft skills required for proper wine service in the restaurant environment, as well as the Wine Service Advance Certificate, which focuses on the upper end of wine service. This bridging process provides a solid foundation for those willing to aim at SASA certifications, or the CMS 4-steps journey toward the coveted MS title. Almost 30 wine ambassadors have already graduated nationwide since the launch of the program.

The Sommeliers Academy has also entered into a first partnership with the Centre de Formation Professionnelle de Promotion Agricole (CFPPA) in Beaune. This will provide students with an opportunity to gain real experience overseas. Successful candidates will obtain a sommelier diploma issued by an official French Technical College. Part of this agreement is the exchange of facilitators between our two schools so we can improve our teaching methodology. Sommeliers Academy is in discussions with a South African Technical University to develop a SASA Sommelier elective to the National Diploma of Food Service, in a very similar way that many European countries certify sommeliers as an elective for Maitre d’Hotel qualifications.

The Sommeliers Academy has been focusing on the service side – not to train wine geeks, but real sommeliers able to deliver the quality of service our wine and tourism industries deserve. With this clear mission, the Sommeliers Academy has been selected by the National Department of Tourism to train over three years a group of emerging wine waiters, and lead them to a SASA qualification. It is at least a clear sign from government acknowledging the lack of proper education within the hospitality industry.

All this will not address the issue of sponsored wine lists, and the way many restaurant owners make short-term bottom-line considerations their primary focus instead of recognising the long-term and intangible value of quality wine lists. This emphasis on education will elevate the profession of sommelier and will ensure that those whose position is presently limited to “window dressing” will have to beef up their skills to attain and maintain the kind of skills which will come to be expected of the position.

Gareth Ferreira, currently working at a 67 Pall Mall, a wine-focused private club in London as assistant head sommelier, won the title. There were nine other competitors in addition to...

How did you become interested in wine? I began working in a restaurant with an owner who was always keen to share his wine knowledge and in turn I would...

How did you become interested in wine? On my first visit to Cape Town from Kenya, I went wine tasting as a thing to do for a tourist. I was...