Jeanri-Tine van Zyl: How to cope in times of darkness

“2015 will be remembered as the year of slow boiling frog,” my friend observed, the wine glass in his hand outlined by faint candle light. We were in the middle of Schedule 2 load shedding, during the very inconvenient 20:00 to 22:00 time slot, and we were feeling bleak. We had forgotten to check the schedule and were left with half-prepared cauliflower mash and raw lamb steaks. While we waited for the power to be restored we drank wine, knowing full well that by the time the lights went on we’d be too well-oiled to care about food.

It’s a tough life.  It is also a life that is often way more complicated than it should be.

During the December holidays my friend and I disappeared off the grid completely. We were staying in a ‘Cape vernacular house’ in Kleinbos, adjacent to Boggomsbaai, on the Cape South Coast, an enclave that runs on solar power and gas alone, and where Eskom’s schedules have no impact.

Fred Orban, together with some friends, created this “footprint development” which is, incidentally, situated between Pinnacle Point Caves , the Point of Human Origin (POHO) and Blombos Cave, where engraved pieces of ochre, some 80 000 years old, serve as the first concrete examples of man’s expression of consciousness, and ultimately his move towards modernity.

Fred has, according to the Mossel Bay Environmental Partnership, “no formal environmental education, only a passionate love for Life on Earth” – and wine as we were to find out. 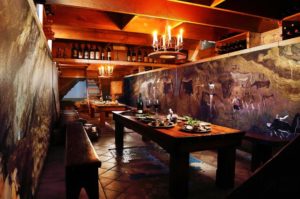 Fred Orban’s ‘wine cave’ at The Sandpiper clubhouse in Kleinbos.

He had invited us over to his house for a “glass of wine”, but as it goes with invites like these, the plural is almost always implied. There we were, on our fourth glass and second bottle of Chardonnay (which had a cauliflower whiff that would’ve made Tim Noakes proud), nibbling on tinned mussels, quoting George Carlin (“The planet will be here and we’ll be long gone. Just another failed mutation. Just another closed-end biological mistake. An evolutionary cul-de-sac. The planet will shake us off like a bad case of fleas!”), when Fred disappeared to fetch “something special”.

He returned with a bottle of Jacques Bruère Cuvée Rosé Brut 2008. Produced by Robertson producer Bon Courage, this example of Cap Classique is still one of my favourites to date, and one that I regard as a pure classic. Fred’s “forgotten bottle” showed that beautiful honeyed character that old bubblies often develop, with a palate interlaced with complex toasty notes. It was close to perfect.

There was no electricity. It was just about pitch black with only the last coals of the fire giving off some light, and the tinned mussels only made us hungrier. But we had a fine example – probably one of the best I’ve tasted – of Cap Classique in our glasses and we were watching the full moon rise. We weren’t talking about slow boiling frogs, then.

Jeanri-Tine van Zyl: Winemaking that’s not about the money

When this platform was still in print, I embarked on a series called ‘Legends’. The aim was to profile the trailblazers and innovators who shaped the South African wine scene...

There’s a certain scene in my life that seems to play out on repeat. I’m at a dinner party where the host is making the obligatory introductions: for all the...

At a recent tasting of Stellenzicht’s range of wines we asked: can you taste the soul of a wine? Gregarious winemaker Guy Webber was standing at the head of the...