Jeanri-Tine van Zyl: Winemaking that’s not about the money

When this platform was still in print, I embarked on a series called ‘Legends’. The aim was to profile the trailblazers and innovators who shaped the South African wine scene in the way we know it today. Those featured held positions across the entire spectrum of the industry, from viticulturists and wine makers to retailers and critics, but they were all alike in that they could not, and didn’t ever, fathom a life that did not include wine.

My first interview for this series was with Oom Piet du Toit back in 2011, who took over the winemaking duties at Helderberg property Alto in 1959. Initially, his task was to ensure the ongoing quality of the famous blend known Rouge but he later introduced a single-varietal Cabernet Sauvignon which underwent extensive barrel and bottle ageing before release, the maiden 1965 only coming on to the market in 1971 – a move which, in a large way, shaped the thinking behind the Wine of Origin system which followed in 1973.

I was interviewing Oom Piet at Annandale, just down the road from Alto where his son Hempies started his own venture. We were sitting in the low-ceilinged tasting room, amidst cobwebs, old wine presses and photographs which all seemed to accentuate the feeling of a bygone area – and the three of us, Oom Piet, Hempies and I, were drinking an Alto Cabernet Sauvignon 1971.

A journalist’s career is dotted with experiences, but some are more transcendent than others. Witnessing the fond interaction between Oom Piet and Hempies, while sipping on wines from decades before, was memorable. I remember Oom Piet saying that for him winemaking was never about the money, Hempies touched his dad’s shoulder “it’s always been about love” he added.

Subsequent to that interview I would see Hempies and Oom Piet attending events together, walking arm-in-arm, a picture of gentle care and mutual love which crossed into their winemaking philosophy – first at Alto, and now at Annandale. 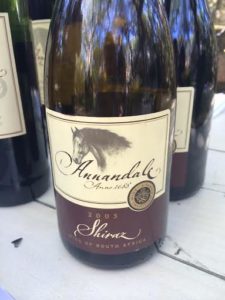 I saw Hempies this past weekend, and I asked about his father. He told me that Oom Piet passed away last month, and that his father’s last words to him were about love. He told me this while pouring me a glass of his Annandale Shiraz 2005, a wine that spent eight years in new French oak barrels – for Hempies winemaking is not about the money either.