SA wine history: On Cape wine during the 1660s

When the Cape’s first winegrower, Jan van Riebeeck, departed for VOC headquarters in Batavia in April 1662, his successor as commander was Zacharias Wagenaar of Dresden, Saxony (Germany). The son of a judge and painter, Wagenaar was a clerk, merchant, member of the Court of Justice and illustrator, and his career with the Dutch East India Company (VOC) would span 35 years and four continents.

Certainly he didn’t find official Company vine plantings much to get excited about. According to the instructions Van Riebeeck had left for him, there were precisely 832 vines planted in the Company’s Garden and at the fort, of which only 82 had produced fruit, while the remaining 750 comprised young rooted vines. 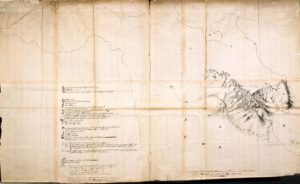 Map of estates in the Table Bay area awarded to former employees of the VOC by land surveyor Peter Potter circa 1658.

However, Van Riebeeck’s ‘own’ vines at Bosheuvel were ‘thriving very beautifully’ (even if there weren’t quite 10-12,000 planted, as he claimed) and some of the vrijburghers farming along the Liesbeeck River (from present-day Mowbray to Bishopscourt) had also started establishing vineyards (we’ll meet some of them next time, most notably the man who would purchase Bosheuvel in November 1665).

From the start, Wagenaar took a fair amount of interest in Bosheuvel, travelling there every August – ‘the right time’ – to oversee the pruning and tying of vines, and to make sure they were being ‘properly manured’. He also visited every February when the grapes were ‘rapidly ripening’, his records showing that Bosheuvel production grew from less than one aum (140 litres) in 1664 to 1½ leaguers (about 845 litres) in 1666, when it was decided to make some French Muscadel because of the ‘aengename, lieffelyke geurs’ (pleasant lovely fragrances) as well as some ‘rynsche rincouwer’ (Rheingauer) or ‘moeslaer’ (Mosel).

A sample of vintage 1666 was sent to VOC directors, the Lords XVII, who acknowledged it positively in their despatch of 23 October 1666: ‘The wine sent us as a specimen, we found, contrary to expectation, very well tasted.’

Wagenaar seems to have focused most of his attention on the so-called Company’s Orchard, which had been established near an enormous, round clump of thorn bushes duly named ‘De Ronde Doorn Boschje’ (later referred to as Rondebosje, today Rondebosch in Cape Town’s southern suburbs). Van Riebeeck had first sown wheat, rice and oats there in 1656 ‘to see if they would definitely suffer less there from the strong winds’ (they did, leading to the establishment of a large granary or Groote Schuur nearby) and in the meantime he had also planted some 1,000 vine stocks there.

Later known as Rustenburg, with its ‘excellent pleasure-house’ for hosting high-ranking officials, the Company’s Orchard was situated on land that now incorporates Rustenburg Girls’ Junior School as well as much of the University of Cape Town. In the early 1660s, however, it was still pretty untamed country, with Wagenaar reporting on 17 November 1663 that a lion had ‘again’ killed an ox near the Schuur. The following week he reported heavy rains: ‘Certainly good for the pastures and our cabbages, but for the wine, melons and watermelons, too cold and injurious at this time of the year.’

In July 1664 he was delighted to discover that the first mate of the Walcheren, Pieter Adriaan van Aarnhem, was knowledgeable about viticulture. On 8 July they went together to the Rondebosje orchard, where Wagenaar reported: ‘He planted some hockaner [Hochheimer] vine slips, which he had himself brought from Germany. Time will show the result. He also left us the model of a wine press that we might have a bigger one made from it.’

On 7 August 1664, Wagenaar had a ‘suitable’ new piece of ground prepared for vines, and enclosed with thick stakes ‘so that the young shoots may not again be eaten off by the rhebucks or wild pigs (as they did in the other new vineyard behind the schuur)’. On 13 August 1664, he duly reported: ‘Over 400 vine cuttings were put into the ground today, whilst tomorrow fully 600 more will be planted.’

The following June and July, he oversaw the planting of a further 4,000 vine stokkies that had been taken from Bosheuvel, but alas he wouldn’t stay at the Cape long enough to see what became of them, departing for Batavia on 27 September 1666 following the death of his wife.

Nonetheless, Wagenaar’s winegrowing achievements at the Rondebosje were noted by a French East India Company official named Urbain Souchu De Rennefort, who visited the Company’s Orchard on 29 December 1666. He marvelled at the herbs, flowers and vegetables, the olive trees ‘heavily laden with fruit’ and especially the two arpents (almost 7,000 square metres) of vines. ‘The grapes would be fully ripe in another three weeks,’ he wrote. ‘Some bunches of them were already eatable, and their wine, according to those who had drunk it, was similar to that of the Rhine.’

By 1673, the Cape’s sixth commander, Isbrand Goske was able to report that production at Rondebosje/Rustenburg had increased to five leaguers (11,260 litres), and by 1684, when 10th commander Simon van der Stel was living at Rustenburg, there were 100,000 vines planted there, deemed capable of producing up to 100 leaguers (53,000 litres) in a good year.

But we’re getting ahead of ourselves. First we need to meet some of the vrijburghers who had initially been ‘very indifferent’ about planting vineyards but whose combined 1671 grape harvest (as delivered to and pressed by the Company) yielded over 23,000 litres of ‘goede en smakelycke’ (good and tasty) wine – almost 10 times more than was produced from the Company’s own fruit.