SA wine history: On the Impact of the French Huguenots

When I started writing about the very earliest history of South African wine a couple of months ago, I ruffled a few feathers with my description of the French Huguenots as ‘vastly over-hyped’ (see here).

I was merely trying to make the point that, far from the Huguenots having ‘introduced’ winegrowing at the Cape (as is often claimed), grapes had been grown here, and wine had been made, for decades before their arrival from 1688 onwards.

To summarise: Jan van Riebeeck was the Cape’s first winegrower in the 1650s, most notably at the Bosheuvel (Bishopscourt). His German successor as commander, Zacharias Wagenaar of Dresden, took an active interest in the Bosheuvel vineyards but focused most of his attention during the 1660s on planting vines at the Rondebosje (Rondebosch) – not forgetting the role played throughout this period by slaves. By the late 1660s the Cape already had a leading winemaker, Jacob Cornelisz van Rosendael, who had purchased Bosheuvel in 1665, and in the 1670s and 1680s many callers at the Cape were describing the wine in favourable terms (tasty, very good, pleasant, delicate…).

The Cape’s tenth commander, Simon van der Stel, was less impressed when he arrived in 1679, finding much of the wine to be ‘harsh’. He duly issued decrees that imposed penalties on growers who harvested unripe grapes or used dirty barrels, and he repeatedly asked his Dutch East India Company (VOC) directors, the Lords XVII, to send out more people with knowledge of winegrowing (while he set about leading by example on his own farm, Constantia, which was granted to him in 1685). 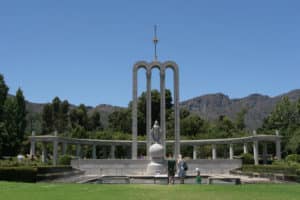 The Huguenot Monument in Franschhoek.

When Louis XIV of France revoked the Edict of Nantes on 22 October 1685, forcing hundreds of thousands of Protestants into exile – many of them to the Netherlands – the Lords XVII thought they had a solution for Van der Stel. In a letter dated 16 November 1687, they informed him that, among a group of French refugees who would soon be arriving at the Cape, there were ‘vine cultivators as well as those who understand the manufacture of brandy and vinegar’.

It’s worth noting quickly that these refugees weren’t the first Frenchmen at the Cape. Francois Villion, a wagonmaker from Clérmont in Auvergne, had arrived in 1671 and was allotted the Stellenbosch farm Idas Valley in 1682 (although the official title deed was only granted in 1692, three years after his death). Similarly, Jean le Long from L’Aigle in Normandy had been allotted ‘Bossendaal’ in 1685, although the title deed was only officially granted in 1713. And the brothers Francois and Guillaume du Toit from Lille in Flanders had put down roots in South African soil in 1686, between them eventually owning the farms Klein Bosch, Schoongezicht and Palmietvallei in Daljosafat (Paarl), and Soetendal and Lemietrivier in the Wagenmakersvallei (Wellington).

While a few of the Huguenots were given land in or near Stellenbosch, most were settled in the area between the Wagenmakersvallei (Wellington) and Olifantshoek (soon referred to as the ‘French Corner’ or Franschhoek), interspersed between Dutch farmers to promote integration – and, indeed, by the time the French astronomer Nicolas Louis de la Caille visited the Cape in 1752, he found that no Huguenot descendant under the age of 40 could speak French.

On 22 April 1689, Van der Stel reported to Lords XVII that the refugees would have to be helped for three or four years as their lands had ‘never been cultivated or disturbed since the creation of the world and so have to be cleared of all wild and useless weeds and bushes’.

By 28 November 1689, however, he had less sympathy for them, complaining about ‘French impertinence’, and on 29 June 1691 he reported that he found them very unreasonable: ‘We find that their crotchety (wispelturige) nature still adheres to them, and that they resemble the children of Israel who, fed by God’s hand in the wilderness, still longed for the onion [sic] pots of Egypt.’

He asked the Lords XVII not to send any more French refugees (and in particular no ‘people of quality’ who weren’t prepared to get their hands dirty) and in March 1699, when he handed over the governorship to his son, Willem Adriaan, he warned that of all the population groups at the Cape, the French were the least trustworthy, not to mention badly behaved, with little knowledge of farming, and so poor that they were virtually nothing more than a burden on the church…

(Note: In this deeply Calvinistic society, hard work and unquestioning obedience were prized above all. If the French settlers – even these very puritanical ones – introduced an element of joie de vivre, or responded to Van der Stel’s many decrees with a Gallic shrug, it probably wouldn’t have gone down very well…)

So who were these 200-odd men, women and children?

They came from all over France, including provinces where no wine was produced, and the men included carpenters, tailors, shoemakers, hatmakers, blacksmiths, locksmiths, swordmakers, bakers, drummers, farriers, tanners and merchants – many of them highly trained, and generally speaking better educated than the ‘rough churls’ who’d typically arrived at the Cape as illiterate soldiers and sailors ever since Van Riebeeck’s time.

As for those from wine-producing regions, some of them were described as ‘vine-dressers’ (or as the sons and daughters of vine-dressers), and those who ‘with some certainty could be linked to possessing some knowledge of viticulture’ included:

So was there immediately an improvement in wine quality following the arrival of the above-mentioned individuals, and others from wine-producing regions of France?

The answer, unfortunately, is no.

With the very notable exception of sought-after Constantia wine (initially produced by Simon van der Stel, followed by Johannes Colijn of Klein/Hoop op Constantia in the 1720s and 1730s), Cape wine was not highly regarded throughout the entire period of VOC rule (until 1795).

Nonetheless, it is an indisputable fact that some farmers of French Huguenot descent did accumulate considerable wealth, which historians such as Pieter Coertzen attribute to ‘hard work and an enterprising spirit’ rather than to specialist knowledge brought over from the homeland.

However, I’ve recently come across a working paper by Stellenbosch University economics professors Johan Fourie and Dieter von Fintel, who use data from the opgaafrolle (household-level censuses drawn up annually for the purposes of tax collection) to show that while there was initially little difference (in terms of wine yields) between non-Huguenot farmers, Huguenots from wine-producing provinces and Huguenots from non-wine provinces, from 1719 onwards the Huguenots from wine-producing provinces did take the lead, and increasingly so over the generations.

Fourie and Von Fintel argue that the ‘specific skills’ of viticulture and winemaking (as opposed to the more generic knowledge required for wheat farming and bread-making) were transferred from father to son through extensive learning-by-doing, and did not tend to disseminate into the broader farming community.

They conclude: ‘Winemaking, different to wheat farming, requires specific skills and knowledge that the Huguenots from wine-producing regions possessed when they arrived at the Cape. They maintained their advantage by protecting these “secrets” – either deliberately through protective behaviour or accidentally due to the high cost of transfer (i.e. years of learning-by-doing). Other settlers may have attempted to catch up – either through using resources such as capital (slaves) more efficiently or through marrying Huguenot wives – but the sustainable competitive advantage of the Huguenots from wine-producing regions allowed them to prosper independently from these tactics.’

Tactics? Transfer of knowledge? Terroir to which they slowly but surely grew accustomed? Whatever the case, and regardless of quality back then, the Cape wine industry is all the richer – to this day – because of the French refugees who put down roots and prospered.

Leibbrandt, HCV: Rambles through the Archives of the Colony of the Cape of Good Hope, 1688-1700, originally published by W.A. Richards & Sons, 1896-1905, digitised by University of California Libraries

SA wine history: The mystery of the matching gables

One lovely aspect of South African wine history is the evolution of our so-called Cape Dutch architecture, featuring beautiful white-rendered finishes, gracious curves and elegant gables. I love how modestly...

Botha is a fairly common surname in South Africa, with examples in the wine industry (off the top of my head) including Dawie Botha (Anthonij Rupert), RJ Botha (Kleine Zalze),...

Believe it or not, there used to be more Pontac planted in South Africa than Chenin Blanc. The red-fleshed teinturier grape, originally from southwestern France (where it no longer exists),...