SA wine history: On the ‘lazy life’ of early alcohol retail in the Cape

Over the past few months, I have shown that wine was produced at the Cape from 1659 onwards. To start with there wasn’t much of it, and it wasn’t very good, but one thing’s for sure: there was an almost insatiable demand for it – indeed for any alcohol – in the absence of much other merriment at this so-called ‘tavern of the seas’. 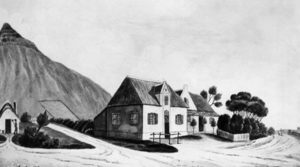 Located in what is now Mowbray, then the Rondebosch farm ‘Welgelegen’ belonging to Johann Zacharias Beck, this tavern originally called Varietas Delectat (‘variety delights’) was dubbed De Drie Koppen (‘three heads’) after three slaves were found guilty of murdering two vrijburghers on the premises on 20 July 1724. Following their execution, their heads were impaled and left to rot at the place of the murder as a warning to others. Over time, the less-than-inviting name morphed into The Three Cups, eventually becoming the Mowbray Hotel. Credit: JF Cornfield, William Fehr Collection, Castle of Good Hope, Iziko Museums, Cape Town

With this in mind, I thought it would be interesting to look at alcohol retail at the Cape under the Dutch East India Company (VOC), that ‘most profitable combination of unblushing piracy and commercialized Protestantism’ as C Louis Leipoldt describes it in 300 Years of Cape Wine.

Formed by royal charter in 1602, when a group of merchants was granted a monopoly on trade with the East Indies, not to mention sovereign rights in any newly discovered territories, the VOC was soon the leading colonial power across the entire Indian Ocean region (including the Cape after 1652). In effect, it was the world’s first listed company, and its primary aim was to return a profit to its shareholders – a guaranteed profit if not necessarily the highest possible profit.

With its monopoly on trade, the first obvious way for the VOC to make a profit was by paying rock-bottom prices to producers. (This is why the vrijburghers were soon lodging official complaints about restrictive trading conditions, claiming that ‘instead of being helped, we are oppressed’.)

Only once the VOC’s requirements had been met were its ‘servants’ permitted to sell their produce to anyone else – but the VOC took control of retail trade, too, through a system of pachts or monopoly contracts, whereby the ‘right’ to sell produce (everything from rice and bread to meat and fish) was sold to certain individuals on a regular basis (another guaranteed source of revenue).

Initially, at the Cape, the right to ‘tap’ or sell alcohol was granted for free – to help those deemed most in need. Thus, rather remarkably, the first alcohol ‘tapster’ in 1656 was a woman: Annetje ‘de Boerinne’ Joris, wife of the head gardener Hendrik Boom, who was not only ‘burdened with eight children’ but also deemed to be ‘sufficiently a free woman’ (the Booms were already living outside the Fort on land adjoining the Company’s Garden). She was duly granted permission ‘to host and house those coming and going on the passing ships’ on condition that she bought all her liquor from the Company’s warehouse at pre-determined prices, and then also sold it at pre-determined prices. (At that stage the only alcohol available was French or Spanish wine, Dutch brandy and Batavian arrack, distilled from rice molasses.)

Additionally, certain vrijburghers who hadn’t been granted land were permitted to open a little ‘taphuijs’ (tavern) to supplement their income from hunting or fishing – for example, the hunter Christiaan Jansz van Hoesum and fisherman Pieter Cornelisz van Langesont.

And business was good, as it turned out. So good, in fact, that in his Memorial of September 1664, Commander Zacharias Wagenaar recorded that many of the vrijburghers, toiling rather thanklessly in their cornfields and vineyards, had noticed that the tapsters were finding it ‘much easier to subsist than they do with their heavy labour’ [ed: has much changed?] and were asking permission ‘to likewise ply such a trade’.

The following year, the Council of Policy noted that ‘among all the free inhabitants here, nobody is able to achieve more comfort, better prosperity, and greater advantage than those who have long been allowed to tap strong alcohol’ – and furthermore that it was ‘continually’ being bothered by new applicants, tempted by this ‘lazy life’.

To deter them (not to mention share in the prosperity), the Council of Policy resolved that tapsters would now need to pay a ‘mild excise’ for the alcohol they bought from the Company.

Those who duly did so in 1664 included the apoplectic Joris Jansz Appel, the tailor Hendrick van Suerwaerden, Jacob Cornelisz van Rosendael (the man who would become the Cape’s first noteworthy winemaker, thanks in large part to his purchase of Jan van Riebeeck’s Bosheuvel vineyards, a purchase he would never have been able to afford without tapping) and Thieleman Hendricksz (a vrijburgher farming at the Salt River end of the Liesbeeck Valley, whose income from tapping would eventually enable him to enter into a lease to take over the production and sale of wine and brandy at Rustenburg/Rondebosch).

Suffice it to say that by 1669, when visiting commissioner Jan Thijssen asked what profits were possible at the Cape, Commander Jacob Borghorst answered: ‘There are no profits to be found in this place … except through the sale of alcohol.’

Records show that the sale of alcohol was not only lucrative but also fiercely competitive. On 4 June 1665, for example, the wives of Hendricksz and Rosendael were called before the authorities for using blasphemous language. It seems Hendricksz’s wife, Mayken, had accused Rosendael’s wife, Catrijn, of stealing business by offering sailors from the homebound fleet their first drink for free.

When Catrijn accused Mayken of dishonesty, Mayken replied: ‘They can say nothing dishonourable about me at the Cape, or that I have sat in the House of Correction, or that I have been a prostitute… Yes, I heard from the homeward-bound that you were such a lady in the Fatherland, in fact a workhouse prostitute, and that … you also have changed your name from Grietje into Catrijn.’

According to witnesses, Rosendael’s wife replied: ‘Be silent, you adulterate your liquor, and if you did not do that you would not have such fine clothes on your body.’

On 12 July 1669 Appel’s wife, Jannetjie Ferdinandus, was accused of ‘grievously assaulting’ Neeltjen Arentsz, the heavily pregnant wife of the beer tapster, Jan Martensz de Wacht, whose baby subsequently died. An investigation found Ferdinandus’s conduct to have been ‘unnatural’ but not – ‘glory be to God’ – to have been the cause of the baby’s death.

In 1673, in an attempt to restore order (and have a bigger slice of the pie), the Cape authorities formalised the pacht system. From now on, tapping would be leased to ‘such four persons who we would deem the most qualified for it’. These pachters would have to buy ‘all wines, beer, and strong drinks, arrack, etc’ from the Company, and for this privilege they would now also have to pay an annual lease of 4000 guilders between them (in addition to the ‘mild excise’ levied since 1665).

For the authorities, it was a success. Just one year later, they recorded that they’d even been able to send 1000 guilders in cash to VOC headquarters in Batavia ‘since our treasury has, by the sale of strong drinks, been so much stiffened’.

Needless to say, the pachts tended to be awarded to the same individuals every year: ‘The wealthiest and most well-off tavern-keepers,’ observed visiting commissioner Nicolaas Verburgh in 1676, suggesting that ‘the common man’ should also be given a chance to participate in the only lucrative business at the Cape.

In 1679 it was therefore decided to hold a public auction every year, selling to the highest bidders (which needless to say still ruled out the majority of vrijburghers!) the rights to sell different categories of alcohol: Malt Beer; Brandy and Distilled Spirits; and European Beer and Wines.

An additional pacht for Cape Wines was introduced from 1684 – and divided into four in 1699, due to its remarkable profitability – with regional pachts for Stellenbosch, Drakenstein and Rustenburg/Rondebosch introduced in 1715, 1716 and 1717 respectively.

This system formed the ‘backbone’ of the alcohol retail trade at the Cape right up until the end of VOC control in 1795, and it was through investment in the pacht system, more than anything else, that individuals were able to accumulate wealth quickly, including a good number whose surnames live on in the wine and hospitality industries today: Botma, De Beer, Eksteen, Heyns, Maasdorp, Mostert and Van Reenen, to name just a few.

Groenewald, Gerald: Kinship, Entrepreneurship and Social Capital: Alcohol Pachters and the Making of a Free-Burgher Society in Cape Town, 1652-1795, thesis presented for the Degree of Doctor of Philosophy in the Department of Historical Studies, University of Cape Town, 2009