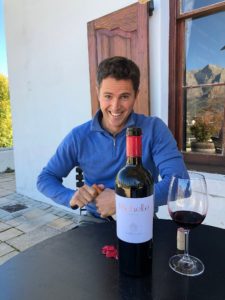 Tall, and wiry with a surfer’s coiled energy Bernard Le Roux hops up into his vintage Landrover—we’ve met at the cellar—and drives us to Zorgvliet’s tasting room.

Zorgvliet is bang centre in the Banhoek sub-region of Stellenbosch. It’s a tastefully appointed property with buildings that pay tribute to the area’s Cape Dutch heritage offset against a mountain backdrop. The patio of the tasting room is filled with people enjoying the winter sunshine and glasses of the estate’s wine. Bernard has been the winemaker here since 2013, and the results of his fairly short tenure are already getting him noticed.

The Zorgvliet Richelle 2016 was hailed Best Wine Overall at the Cape Bordeaux Red Blend Report 2018, and scored 94 points on the 100-point quality scale (see here). He pours us a generous glass each of the award-winner while we unspool the story of his life in wine.

Bernard knows a thing or two about Bordeaux varieties. Not only has he worked a few harvests in California, but his adeptness with the style saw him becoming Vilafonté’s winemaker from 2005 to 2010. (Vilafonté is well known for their luxury Bordeaux-style wines.)

He left his position there as he says he was becoming known as ‘that Bordeaux guy’. “I was too focused on Bordeaux reds. I wanted to get more experience.” So he went to Noble Hill. “They needed someone to manage the vineyard, which I hadn’t done before.”

That’s the kind of guy he is. He likes to lift the lid on things—whether it’s a bonnet of one of the cars he’s currently tinkering with; or the business side of wine; which he did a course in at UCT in 2010. Looking back over his life thus far, it’s easy to see he’s always let his curiosity lead him.

Growing up in a traditional Afrikaans family in Cape Town, the wine bug bit when he was a waiter at a school function. His job was to pour the wine. Wine legend Beyers Truter, who was a guest at the event, transfixed the young Le Roux. “Beyers was so charismatic. I got interested in wine then and there.”

So his grandfather—who worked in the industry, though not at the winemaking level—took him to meet a few winemakers to get a feel for the business.

It was all laid out in front of him. A career in the outdoors he loved, work he could get creative with. But then a crisis of conscience, about working in an alcohol-related trade, attacked.

His technical side then drew him towards studying mechanical engineering instead at Stellenbosch University. “I was standing in the line to sign up for the course, and while I was waiting I noticed the line next to me were the oenology guys.” An hour ticked by. “Yip, I jumped into the winemaker line.”

While he was studying he cut his teeth at Flagstone, with the ever-erudite Bruce Jack.
“Very poetic guy—and a super marketer. In those days people didn’t tell stories like he did. The winery was also way ahead of its time, sourcing grapes from many different vineyards.”

Changing tack again, he immersed himself in the culture of Hamilton Russell, working two vintages with Kevin Grant. “The focus was completely on terroir: a sense of place and respect for the soil.”

Getting restless he boarded a yacht with the idea of going via the Seychelles and the Maldives to Australia to work some vintages. But fate had other plans. While surfing in some remote tropical inlet, he cut his head open on a reef. “It was a turning point.” He realised he wasn’t heading in the right direction, both geographically and in his career. “I wanted to be at home, I wanted to settle into a permanent position.”

Surfing buddy Miles Mossop offered him the job of cellarhand at Tokara, while he waited for the right post to materialise. And materialise it did, in the form of ultra-premium winemaking at Vilafonté with Zelma Long.

So now we’ve come full circle to the rolling hills of Zorgvliet where he lives with his wife Adele and their two young sons. Bernard gestures to the surrounding vineyards telling me as he does that Zorgvliet also owns the neighbouring farm, and that the adjacent Le Pommier is owned by a family member of the estate too. “We pull in grapes from all three, though the estate wines are made from grapes grown just on Zorgvliet.”

Swirling his glass of Richelle (which is named for the owner’s daughter) he says: “I have a lot of experience with American-style wines, and I don’t want to be critical of them. The stylistic approach is opulence: richness, fullness, the more the better. It’s a thread that runs through everything over there.

“But I also love the herbal characters you get in cab—it’s a varietal character and what matters is how it’s managed, it doesn’t have to be a fault.

“It’s more difficult to make a nuanced wine than it is to make a full wine. In some way, I’m edging backwards in my winemaking. This wine is still modern, it’s still rich—but it’s got that element of restraint. The wines made in a very ripe style deflate as they age, whereas wines with those herbal characteristics become more savoury. There are more interesting possibilities making wine this way.”

And we wouldn’t want him to keep a lid on that.