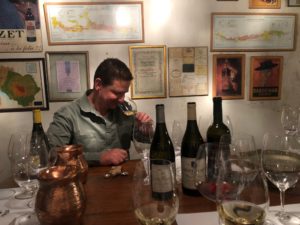 “We’re bottling today,” explains cellar master Chris Williams over the din of a mobile bottling unit parked outside Meerlust’s cellar. He leads me past it and across an obstacle course of pipes laid across the cement floor. The noise slowly fades into a distant hum as we’re swallowed into the hushed interior of the cool, dark wine cellar. We pass a row of foudres, and just beyond this is the cellar tasting room. It’s an altar to wine, sealed off from the rest of the world, where intrusions like spreadsheets and deadlines lose their power. The walls are hung with retro wine art, portraits of Meerlust alumni, and there’s one of Chris’s predecessor, Giorgio Dalla Cia scowling darkly out at us from a far corner.

I get the sense that Meerlust isn’t trying to be anything other than what it is: South Africa’s oldest family-run winery (it’s been owned by Myburghs since 1756). It’s a beacon of heritage winemaking on the outskirts of Stellenbosch.

“It’s a place not a brand,” says Chris. “Continuity of style is important, we only use our own grapes, and we want to express the site. There’s a built-in intellectual property. Though we do of course evolve and the wines become more idiosyncratic every year.”

“We want our wines to be distinctive.” He pours us glasses of the Meerlust Chardonnay 2017, which recently scored 94-points in this site’s 2018 Prescient Chardonnay Report. “It is so typically a Meerlust chardonnay. That’s what I mean by distinctive.”

He elaborates: “The hallmarks are, most importantly it must be delicious – too often we forget that about wine. Then precision of flavour: it has to be identifiably chardonnay. Then it needs to be well oaked without obscuring the varietal character.

“We make maritime chardonnay – we’re five kilometres from the sea – the clue is in our name, ‘Meerlust’ meaning ‘love of the sea’.”

He continues: “Our chardonnay has an expressive core of ripe fruit, which is an indication of it belonging to the New World; but with an Old World restraint and elegance of the oaking regime.”

Born and raised in Illovo, Johannesburg, Chris shrugs his shoulders and says: “I never felt at home there.” So it was down to the Cape he came to do his tertiary education. “I went to UCT to study law, and immersed myself in the wine culture, from being a part of the Wine Culture Society to getting a job in the tasting room at Klein Constantia, Ross Gower was a great mentor to me.

“I realised very quickly law was not for me. I finished my BA and went to Elsenburg to study Oenology in 1992. I got my piece of paper, but my education really was tasting wines and asking myself the question: ‘This is special. Why?’.”

A trip to the Rhône in 1994 with his Elsenberg classmates, winemakers like Eben Sadie and Marc Kent, made a huge impression on not only him but on all of them.

“It was the dawn of democracy and the range of wines we had been exposed to so far had been small. The wines of the Rhône valley blew us all away. That trip had a massive impact on South African winemaking as a whole.”

He continued to broaden his horizons in France working for famous consultant Michel Rolland. And at some point he came home and landed the job as assistant winemaker at Meerlust from 1995 to 2000 under the tutelage of legendary winemaker, Giorgio Dalla Cia.

He left for a few years to work at some other estates as well as to start his own brand of wines, The Foundry Wine Collection (which continues to produce outstanding wines from adjoining vineyards at Meerlust as well as from co-owner James Reid’s vineyard in the Voor Paardeberg).

But as kismet would have it, in 2004, owner Hannes Myburgh called with the job offer of head winemaker. “I didn’t even let the phone hit the floor before I was in my car and on the way back. Having worked with Giorgio, I knew what needed to be done to bring Meerlust to its next evolution.

“I knew the character of the vines, but I had also started The Foundry so I didn’t feel the need to put an ego stamp on the wines. I knew Meerlust was bigger than me. It’s a balancing act: what can my abilities bring to this place and how do I keep it great?”

Pervading the room with its dark perfume is the Meerlust Pinot Noir 2016, the next wine in our tasting. “My real love is pinot,” Chris admits. It’s been a journey not something I started out with; all wine roads lead to Pinot, it’s a destination wine. I’m drawn to the purity of fruit, the precision of flavour – pinot is so much about the nose, the aromatics, the musk. It’s like a lens magnifying everything that it experiences good or bad in the vineyard, you can’t blend it away.

“It doesn’t play nicely with others, the structure of the wine sits so far away from other varietals. There’s something about it that’s untamed, untouchable.”

Our attention is now drawn to glasses of inky Meerlust Rubicon 2015. “Whereas with the Rubicon – and I love it for this – is much more masculine. You can know it.

“For us as an estate it all comes together with the Rubicon: it has that Cape feeling, a core of juicy fruit that puts it in the New World but with a slight austerity and classical styling.”

He points out the row of foudres behind us telling me as he does that they were recently purchased. The large barrels contain percentages of the Rubicon blending components from the last vintage. “Historically that’s how we used to make wines at Meerlust and I’m bringing them back. We vinify the components separately, and the foudre portions will make up a 20 per cent of the final Rubicon blend.

“Why am I doing this? The wines made in the foudres are still so alive 40 years later.” To demonstrate he pours us glasses of Meerlust Cabernet Sauvignon 1978. “The evolution of the wine is totally different in the foudres. It’s about preservation of fruit and perfume.

“To evolve we sometimes have to look back. What do they say? Wisdom is experience.”

It’s back out into the sunshine, and past the bottling unit that’s packaging living history and sending it into the world.