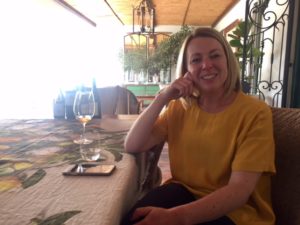 Corlea Fourie knew she had something special with the Optenhorst Vineyard. Located on a hill of the Bosman Family Wines farm, the vineyard is watched over by the ‘W’ in the Wellington Mountains. Stocky, sturdy chenin blanc bush vines thrust out of the ground. There’s a graveyard-like stillness up here, a feeling brought on perhaps by a tribute pillar, which is surrounded by the old vines—and the whorls in the wood track the years in spirals, showing just how long these vines have been growing.

Planted in 1952, these vines found themselves fated for uprooting in 2007. One morning Corlea came up here—she had just come on-board as winemaker—and stood in the stillness, her gut told her they needed to put a halt to their removal. Three months later they tasted the resulting chenin from the barrel. “We were speechless.”

The more I talk to Corlea, the more I realise that this kind of intuition is her secret superpower. After a drive around the farm we’re welcomed into the Bosman family home for lunch and a tasting on the porch. MD Petrus and his wife Carla Bosman (she’s the direct market manager) live here with their two children, and they joined us at the table. A selection of wines have been laid out on the tablecloth featuring bright yellow lemons.

With the Optenhorst Vineyard dancing in mind, Corlea uncorks the 2015 vintage; the vineyard is drawn on its label. Barrel fermented and matured in 228-litre Burgundy barrels, the wine is complex, textured—and I’m also grateful after tasting it that Corlea acted on her intuition.

Petite, with blonde hair to her shoulders, Corlea may at first seem quite reserved. She’s softly spoken, but I get the feeling the quietness comes from the fact that she’s constantly observing, like a true scientist. In her manner—she also has an innate and ready kindness—I can see the possibility of the doctor she at first wanted to become.

Growing up in Bloemfontein, where wine in the 80s was a scarce commodity, Corlea was lucky to have a wine-loving father (who himself grew up on a wine farm in the Northern Cape). “My friends would come over and he’d present wines to us,” she says smiling at the memory. After school when she was firmly on the path to pursuing a medical degree, she paused, and drew on her instinct: “Something felt amiss. I was beginning to think it wasn’t the right fit.”

So, like most coming-of-age stories. Corlea went off to find herself, and spent a year working in the U.K. Six months behind a bar in Scotland proved formative: “I had finally put my love for wine and science together.” She remembers calling her dad from a pay phone (on a rainy Scottish night, of course) with her decision to pursue a career in wine. The time proved to be good for more than inspiration. With the favourable pound to rand exchange rate, she was able to save enough money to pay for her studies in Oenology and Viticulture at Stellenbosch.

She went on to work at both Stormhoek and Lazanou Organic Wines, but it was a stint at Diemersfontein that had the most impact—in her personal life in any case. It was here she met her husband, Bertus Fourie, who was then the winemaker. At the end of their first harvest together, they were in engaged.

These days the couple live in Wellington’s town, and have added three children to the mix—twin boys and an older girl.

Corlea feels that she got lucky by working for a family while raising a family. “It has made it quite personal. Choosing your career family is important. It also means that we often make decisions around the lunch table,” she says.

Corlea has also done well by virtue of the fact that she works at one of the most important vine nurseries in the southern hemisphere, Lelienfontein Vine Growers—which falls under the Bosman family’s interests. This means Corlea is literally at the cutting-edge of viticulture and this makes for interesting winemaking opportunities.

“There’s always something new—in the last 12 years we haven’t done the same thing twice. As a winemaker I often have the opportunity to be surprised.” Like with the Nero d’Avola 2015 she’s pouring us glasses of now. “It’s so well suited to a climate such as ours—and we get perfect structure in the wine by doing as little as possible to it.”

It was Petrus who started the laborious process of bringing this new varietal into South Africa. Eventually 10 years later after he had begun, they harvested the first grapes. They’re currently on their second vintage.

We end off our farm lunch with snifter glasses of the Dolce Primitivo 2016. The primitivo vineyard used for this natural sweet wine is planted around a dam where an Italian WWII prisoner unfortunately drowned and the wine is a tribute to the history of these prisoners and their influence on the establishment of many Wellington industries.

History is a side of wine that makes Corlea’s eyes light up: “As a winemaker if you can really create things that are hooked in time and place, then you’re doing your job.

“I also love the theatre of this wine.” A nod to Wellington’s dried fruit industry, the primitivo was partially dried on racks in the sun before fermentation.

I know Corlea has already thought about my last question—because that’s how she is—before I even utter it. I ask her what she wants to see more of in the wine industry.

“Collaboration,” she says without hesitating. “Where we combine our various strengths as an industry to produce something better.” Call it intuition, but I have a feeling she’s right.