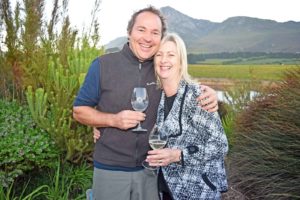 As soon as I arrive at Creation Wines, my phone loses signal—it feels like an instruction from the cosmos to focus on the unbeatable beauty of the Hemel-en-Aarde Ridge all around us. An eagle glides off in the distance over the dam, and the fynbos hedges leading up to the tasting room are thick with the sounds of bugs and birds.

Jean-Claude Martin, co-owner, viticulturist and cellarmaster of the estate welcomes me with a glass of the Elation Méthode Cap Classique 2015 (a chardonnay and pinot noir MCC that’s classified as ‘Brut Nature’, a dry style that contains only the natural residual sugar).

JC, as he’s known, is sitting silhouetted against glass doors that look out onto the vineyards; boomslang-green vines span the surrounding hills in their late spring cover crop, inching up the Babylon Toren Mountain, 350 metres above sea level.

“When it came to buying the land, we considered three things: it had to be virus-free, cool climate for South Africa, and have enough water.”

In 2003, Swiss-born JC planted the first vineyard here. He grew up on Lake Bienne and his family owned a small estate. He was 14-years-old when he worked his first harvest.

At age 17 he studied viticulture at Wädenswil, after which he qualified as a winemaker at the Swiss Federal School of Changins in 1995.

In true garagiste style, he made his first wines in 1996 in a garage in a small French-Swiss village. He went on to become the winemaker, then director, at Domaine Grillette in Neuchâtel.

Viticulture and winemaking always went hand-in-hand. “Because of the general size of the estates in Switzerland, you had to be both,” explains JC. This training allowed him to dream big with Creation’s vineyards by planting virus-free blocks on virgin soil.

Over the years JC had been slowly getting acquainted with the Cape winelands, starting with an internship at Glen Carlou in 1995. He came back in 1998, and the stars aligned when he met his now wife Carolyn. Daughter of Walter Finlayson, Carolyn comes from legendary wineland’s stock.

It was her uncle Peter Finlayson, of Bouchard Finlayson, who showed them the farm that was to become Creation. Says JC: “Peter said to me, ‘this farm has a promising future’. But then it was a just a sheep farm.”

The wild land suited JC, and as kismet would have it, this was just when the KWV Plant Improvement (now known as Vititec) programme had got going. “They required a virgin piece of land, and I wanted approved virus-free plants—it was a win-win.” Now over 15 years later, Creation’s 65-hectares are still virus-free.

“I wanted complete freedom of what I wanted to plant.” And so, along with the chardonnay and pinot noir he was so familiar with from his vineyards in Switzerland, he also planted syrah, viognier and grenache as well as a small block of Bordeaux varietals. JC was literally testing new ground.

“I spend more time in the vineyards than in the cellar tasting from my barrels. Once wine is in barrel there’s not much more you can do.”

He continues: “Our vineyards are now 15 years old, and we’re seeing a nice progression, the plants are starting to slow down in vigour and our reds are becoming more complex as the vineyards age.”

The proof is in the pinot. The Art of Pinot Noir 2015 was awarded best wine overall, scoring 93 points on the 100-point quality scale in the Tonnellerie Saint Martin Pinot Noir Report earlier this year.

“With pinot, there’s no room for shortcuts; and the choice of clone is so important. For me 115 is the best clone, it makes up 80 per cent of our pinot vineyards.

“But it goes deeper than that; we’ve started the process of massal selection, which is the observation of the effects of a specific piece of land on each plant. All the new plants are based on the best preforming plants in the clonal family. There are a lot of elements at play in the clone itself, in this way you can fine-tune your vineyard.”

JC says they observe and then mark the plant with say a yellow ribbon if it shows desirable characteristics. “If something happens once it’s insignificant, if it happens five years in a row, then you know. It takes a tremendous amount of time; it’s a job for a generation.”

He also shares with me that the public can expect wines from the first virus-free grenache blanc vineyard in South Africa, to be released in 2019.

The tasting room and restaurant has started to fill up around us. “In 2008 we opened to the public, we had one table and a few couches. We thought we had to offer people something, as they had to drive 10 kilometres on gravel road to get to us, so we served platters of cheese and charcuterie. Five to eight visitors was a busy day to us back then.

Creation now welcomes 80 000 visitors annually. The story of creation would not be complete without talking about the food. This is where Carolyn’s distinct culinary genius comes in. She has devised a number of Wine and Food Pairing options all available from the tasting room, the opus being the six-course “Story of Creation” pairing menu. While most pairing menus first create the dish, and then find a wine to pair it with, this is the other way round—dishes are created especially for Creation’s wines. It’s dazzlingly successful.

The pairing of the day for me is the lamb loin, gremolata and violets with the accomplished Reserve Merlot 2015. The seared tuna served with the Art of Pinot Noir 2015 is a seamless match too.

“We catch the tuna for the restaurant ourselves,” says JC. The ‘we’ he is referring to is he and his 18-year-old son, Glen. They also have a daughter, 16-year-old, Emma—who has already made two vintages of Pinot Noir.

“If we’re not travelling you’ll normally find us here in the tasting room over the weekends,” says JC. “People see our wines in relation to us and we feel that’s important.

“When someone comes here and spends their hard-earned money on our wine, they’re getting an honest insight into who we are and what we do. Around 30 per cent of our turn-over is from the estate itself.

Creation currently produces approximately 350 000 to 400 000 bottles a year. “We don’t want to be bigger; we could go up to 700 000 and it could potentially collapse. That sweet spot is critical. Don’t go bigger just because you think it’s better. Do what you do for the next generation.”

It was astrophysicist Carl Sagan who said, “Somewhere, something incredible is waiting to be known” – and if you haven’t yet got to know Creation, a pretty incredible experience awaits.

To stand the chance of winning a food and wine pairing experience for you and three friends, click here.

Creation in Hemel-en-Aarde Ridge has gained a reputation for being one of the top tourist destinations in the winelands offering elaborate food and wine pairings as well as regular art...