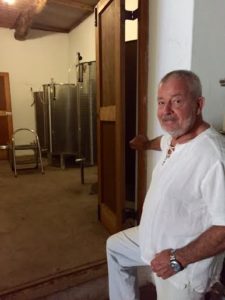 Nothing can prepare you for the sheer drama of Peter Bayly’s Klein Karoo vineyard. Hidden just off a dirt road, a sign with a flying pig swings lightly in the dust. The entrance is humble, which makes the view of the vineyard as you turn the corner even more thrilling.

Bordered by towering cliffs strung with aloes, succulents — and plenty of baboons — are 1.2 hectares of Touriga Naçional, Tinta Barocca and Souzão.

On closer inspection we see the vines are roped in by electric fencing. “It’s the price you pay for having a vineyard in these mountains,” says Bayly who’s come out to greet us, loping dogs, and a guinea fowl, in his wake.

“There are normally around 300 baboons up there.” (The security is to keep the baboons from snacking on the grapes.) “Lately, we’ve had a leopard in the mountains, which has helped with the problem…”

From these vines the Baylys make a number of port-style wines: vintage, late bottled, tawny as well as a white port made from chenin. He’s also making some smooth red blends with the varietals. He pours us a glass from an unlabelled bottle. “The tannins are gentle like people that live in the sunshine,” he says.

“The soil and climate are virtually identical to parts of the Douro. The grapes here are different to Calitzdorp, it’s has its own microclimate, plus we have more than double the rainfall.”

The Groenfontein Valley is aptly named. Surprisingly lush and green this strange, secluded valley carves through the Klein Karoo just outside of Calitzdorp. There are only dirt roads, plenty of donkeys, many artists, no cell phone reception — add to all that spellbinding natural beauty, thanks to the abundance of water.

Peter and his wife Yvonne bought the farm in the late 1990s as a holiday home “with vines as a hobby”, but it was only after the first harvest in 2004 that it became permanent. “We decided to try it for a year—and we never went back.”

The Baylys not only relished the tranquillity of the area, but also understood if they wanted to make the wines well, they’d have to commit.

Self-taught, Peter says he had a lot of help from winemakers in the area with the first couple of harvests. “Nobody wants you to make a bum wine, it’s bad for the area.”

As we’re chatting Peter shows us his cellar and explains the process. “What happens in the vineyards each year determines the ratio of the blends. It’s totally seasonal and varies from year to year. We like that it’s slightly different every time.”

The grapes undergo natural fermentation in “lagares”, which are traditional Portuguese open-fermentation vessels; and are then treaded by foot. “There’s something about the pressure and shape of the foot. Even the machine treaders are shaped like feet.”

It’s then fortified with grape spirit and the wine matures in seasoned large-volume French oak barrels.

We head back to the porch to taste. Peter says when he does tastings, people generally won’t leave until the sun goes down.

Yvonne and Peter are gregarious, enthusiastic hosts—a legacy perhaps leftover from their many years in hospitality.

Peter was born in Rhodesia, and before his path led him down one paved with food and wine, he went overseas to become a chiropractor. This idea didn’t stick, and he came home to farm tobacco and cattle. Still figuring things out, he then went from insurance assessor to restaurant owner, with Walter’s Grill in Sea Point in the early 1970s.

Being ahead of his time, his next venture was to open a restaurant in a house called Farthings, a fine-dining eatery in Kenilworth. But where things started to get really interesting with the wine, was when the couple (along with a partner) opened Ellerman House.

“It only had seven rooms back then.” Peter was an integral part of building and stocking the hotel’s celebrated wine cellar.

But farming is in his blood. Coming full circle he looks a contented man as he sits on his porch pouring port. He offers us a “Karoo cocktail”: white port and tonic topped up with ice.

I ask him how he got the idea to put a flying pig on the label. “He was wearing a tie with pigs on it the day we designed it,” says Yvonne with a laugh.

The portly pig has now come to symbolise that dreams can come true. I think they may be right.