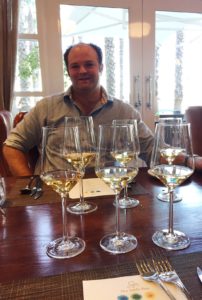 “I couldn’t get a job I really cared about,” says Rikus Neethling. So in 2008, when it was still not very much the norm for winemakers to do their own thing, he did. “I’d been at a co-op and there just wasn’t any passion not that we didn’t make good wines.” This time would prove to be formative in both the cellar and in the long drives to work. “It was beautiful driving in the mornings. I’d have the road to myself and I could mull over all my ideas as I watched the sun come up.”

He tells me this over a table laden with glasses at The Table Bay’s, Camissa Brasserie. Sunlight streams in from the windows overlooking the harbour. He’s chosen this restaurant as he has a long-standing relationship with the Table Bay and Sun International in general as he oversees the making of the house wines.

“I was fortunate to start Bizoe Wines when I did. I was 26, and at 26 you can still make mistakes, and then pick yourself up and go on. A lot of guys want to do their own thing, but it gets riskier as you get older and have more to lose.” Neethling is reflecting here on his own life. He’s married with twin boys and he couldn’t imagine now taking the kind of risks you need to in order to become independent.

He lives on Croydon Vineyard Estate (between Stellenbosch and Somerset West), and because winemakers love to take their work home, there are some 8ha of vineyard on the property and almost 200 homeowners are also shareholders in the associated wine company. In 2015, Neethling took over the reins of making the Croydon wines. “It’s a well-oiled machine now, and it’s time to focus on Bizoe again.”

Bizoe is boutique and the main focus has been on export. Neethling says his mission now is to drive the brand locally. Derived from the French word ‘bisous’, meaning little kiss the range incorporates a Sémillon-Sauvignon Blanc blend, a Syrah, a Chardonnay and a Sémillon dessert wine.

“I’m a Sémillon fanatic.” We’re kicking off lunch with a backwards vertical of the Sémillon-Sauvignon Blanc blend, named Henriëtta for his mother. We taste from the ’16, to the ’15, and finally the ’14. The reason for tasting like this? Neethling wants to illustrate how the wine grows in character as it ages. “Sémillon is a like a little boy in the bottle and as it ages it starts to get muscles, he gets bigger.”

“Sémillon works in South Africa,” says Neethling matter-of-factly. A champion of the cultivar he says: “It works because you can taste it works.”

Neethling was never going to study winemaking. The plan was marketing. He came down from hometown Benoni to play cricket in Stellenbosch and was not only taken with the area, but with the idea of winemaking. Though he was signed up for a marketing course at the University of Stellenbosch, he wouldn’t let a little something like that stop him.

On his first day at varsity he went to the registration office where they rightly pulled up marketing as his field of study, upon which he said: “I think there’s been a mistake. I’m here to study winemaking.”

So after some paper reshuffling – and an awkward phone call to his dad, who demanded he get on a plane and come home, because clearly he’d gone mad – he went on to do a degree in B.Sc. Agriculture, Oenology and Viticulture. His dad came around to the idea, and now his parents are even running one of the biggest wine clubs in Benoni.

Our starters have arrived. The Idioglossia Chardonnay 2016 is paired with langoustine tail, wild garlic and a snow pea watercress purée.  This is the first release of the Chardonnay and it was named for his twin sons, Andrè and Retief, who are 3 (and a bit) years old. The term ‘idioglossia’ refers to the secret, made-up, languages of twins.

“I’m still playing around with Chardonnay—I’ve bought some amphora pots and I’m thinking of doing something with them for 2017.”

Switching to red for the second course of lamb loin with nasturtium risotto, Neethling pours us glasses of Estalet Shiraz 2014 – the spiciness of the nasturtium goes beautifully with the wine).  “The grapes come from a Breedekloof vineyard, it’s really not much to look at, but the grapes deliver such concentration.” This wine is named for his wife, Estalet.

He said he came to varsity as part of the cricketing programme, and had visions of meeting lots of girls. His plans were foiled when he met Estalet in the first week. “That was it, I was done.”

Though he went on to play cricket semi-professionally with the likes of André Nel and AB de Villiers, he soon felt that it ‘just wasn’t fun anymore’ and he turned the full force of his focus onto wine. (These days he’s an avid golfer.)

It’s back to white with the third course of seared salmon trout with a seaweed fennel salad; an inspired match with the Bizoe Henriëtta 2016. He loves his mom dearly and he tells me a story of how he witnessed his mom being hijacked when he was a teenager, an event that certainly left a big impression, especially of his mom’s fierce bravery and her “lioness-like love” for her kids.

And now one for dad. “Tiny is the nickname they gave my dad at varsity,” says Neethling.  His dad really is of a small build, so it’s not the usual ironic way the nickname is used. A straw wine, the Bizoe Sémillon 2014 is paired with a spiced poached pear with ginger sorbet, fennel apple jelly and cheddar puff pastry.

“You’ve got to try the 2010,” he says. Neethling calls over a waiter and successfully wrangles a bottle from the cellar (the wine is as rare as hen’s teeth). Once we have the amber liquid in our glasses he elaborates that ‘something’ went wrong in the making of it, but the fault turned into a strength – and the wine has a delicious almost oloroso-style nuttiness to it.

“I haven’t been able to repeat it,” he says almost wistfully. Though the 2014 is no slouch, honeyed and floral it’s a thoughtful match with the ginger and spice of the dessert. The Tiny also demonstrates the places Neethling is willing to go with sémillon, in a bid to express the varietal’s diversity.

In fact Sémillon fanatic that he is, Neethling is gearing up for a much-anticipated trip to Australia’s Hunter Valley. “I want to do something different with Sémillon next year, but first I want to go and taste and steal some ideas.”