Marthélize Tredoux: Are Platter’s ratings a boon or a bane?

I usually refrain from jumping on bandwagons and simply throwing my opinion onto an already sizable pile, but today I’m going to make an exception. There’s been a lot of chatter since the 2018 Platter’s Guide was launched recently,

Quick review for those who have been under a rock:

Most notably, aside from the familiar 5-star ratings, the guide this year added scores on the 100-point scale to the offering – though as I understand it, these scores are not available in the printed guide but will only be on the app and as stickers.

This is where my annual doubt about the true relevance of Platter’s begins to creep in.

Now, before I get pelted with a pile of Platter’s Guides, first a little caveat on any criticism that may follow: It has undoubtedly become an institution in South Africa, which is no small feat. If you have ever spoken with any of the people who taste and write for the guide, you will have an idea of the sheer amount of work that goes into it. The tastings alone are a rather intimidating mountain to conquer – more than 8000 wines are evaluated. The guide is impressively detailed in the extensive information it contains.

I think this is where my dissonance about the guide’s value – or purpose – comes in.

Its usefulness as a comprehensive guide to nearly every South African winery is currently unparalleled – both in print or digital (online or app). It allows access to information about each winery, including their offerings and of course the star ratings.

It’s those ratings that are starting to become a problem for me.

Firstly, I question the actual value of these ratings. Every year after the release of the guide and the top wines, the same conversation repeats itself in the industry and on social media – there’s a flurry of excitement and congratulations followed by weeks of grumbling about stars and stickers.

I wonder if most of the people who argue that Platter’s is merely a guide and not a competition have ever seen an average Joe walk into a tasting room with the book stuck to his face, demanding to taste “only the 4.5 and 5 star wines”. Consumers don’t care to understand, they simply chase the “best”. And pointing out the guide includes an explanation as to what each star rating is meant to represent holds no water with me because most people don’t bother reading that. So while defenders of the guide like to insist that the gradations between the different star ratings are meaningful, the real-world impact is casually ignored. 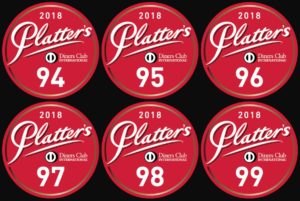 And this year I can’t help but thinking they’ve entirely lost the plot a bit with the dual scoring system. Let’s recap, shall we?

1. 8000+ wines rated – the ratings are done on a 100-point scale which translates into a star rating.
2. The 100-point ratings are not available in the printed guide but only in the app, so if you want access to both, you need at least a subscription (and they punt the printed book so hard, the message is clear: why not get both? Ka-ching!)
3. Previously the 5-star wines were all on equal footing – now the achievement superiority gets sliced even more finely with the scores differentiating all 5-star wines based on their 100-point scores.

You see where I’m going with this? Now, producers get to slap two stickers on the bottle – the star rating AND the points rating. It will all look very festive, just in time for Christmas, because like one of my prolific industry friends said on the matter: “Christmas trees sell.”

I am finding it difficult in light of this year’s changes to see what the point of this dual system is (both in the stickers that will be sold as well as the hard copy/app subscription combo that’s being pushed) beyond a neat money spinner.

As I said before, Platter’s is an institution. But institutions fall if they are unwilling to evolve. And just because you have a digital version of a traditional concept, does not mean you are, in fact, a digital player. While the demand for the print version will likely not decrease any time soon, I can’t help but feel that the team behind Platter’s are standing on the cusp of massive opportunity to push forward into the digital sphere and innovate into something unprecedented, and they’re just sort of ignoring it.

No matter. The stickers will sell. The consumer base will chase the most heavily adorned bottles. Money will be made and congratulations will be exchanged among all those involved. And next year, we get to have the same conversation, all over again.