This week, I along with some other wine media and industry members cracked an invite to have a sit-down with the head honchos at Distell. We had been contacted and told that SA’s largest producer-wholesaler was interested in opening up channels of communication and that they intended to make this a regular occurrence. 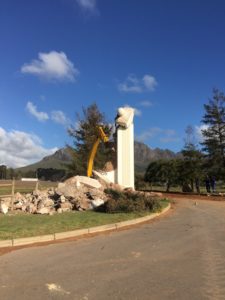 Before we get into it, some context: There has been plenty of speculation around the dissolution of the Lusan Premium Wines (the joint venture between Distell and German financier Hans Schreiber which at one point involved Le Bonheur, Uitkyk, Stellenzicht, Alto and Neethlingshof)  and the selling off of a number of wine farms and my feeling that this roundtable discussion was conceived – at least partially – because they wanted to take control of the discussion around this move.

We sat down with a number of Distell’s management, including Richard Rushton (CEO), Lucas Verwey (Director: Finance), Bridgitte Backman (Director: Corporate and Regulatory Affairs) and Steve Nathan (Director for International Operations). Rushton welcomed us and indicated that the goal of the meeting was to convey some information to us on the company’s plans in terms of wine specifically and also to take questions.

It was a lengthy discussion, with management addressing most of the questions fired off directly and without too much corporate spin, and handling any and all criticism alluded to with candour. Going into the details of it all will be lengthy, but there are a few key points worth mentioning:

A lot more was discussed and questioned and I surely won’t be the only one writing about it. For me, it is worth finding context and perspective for this meeting and pinning a value on the exercise.

Was this meeting strongly tied to a mix of gossip and criticism around the recent moves in the Distell portfolio and property stable? Probably.

Was it a polished PR/Communications exercise? Possibly.

What will come of this discussion? In isolation, probably not much. But if this does become a more regular occurrence – and they involve people from all corners of the wine industry – it could become a useful platform to convey criticism, opinions and ideas and maybe even bring about some changes.

The wine industry is a sucker for the David and Goliath imagery, and any action by large players is often shrouded in cynicism (sometimes rightly so…). Yet publicist Emile Joubert made a good point regarding their role in “generic marketing” – they do a good job of keeping wine in the public eye through levels of spend on various forms of advertising and broad marketing that can’t be matched by most other producers. Yes, of course they’re promoting their own brands. But they are ultimately also promoting wine.

So now what? That depends. We can start by making the most of this call for comment and take valid criticisms straight to the source. I’ve been prattling on about platforms to discuss industry issues since I started attending VinPro events three years ago. So in principle, I fully support this endeavour.

Perhaps by dispensing with the usual, useless muffled grumblings of disapproval and replacing it with some constructive, intelligently articulated criticism, some of the pricklier industry issues can be resolved – or at the very least, addressed.

Is one breakfast meeting going to change anything? Don’t be daft. But it might be a start.