I like the term “truth bomb”. Dropping a truth bomb is so deliciously satisfying. It should completely floor  everyone within the blast radius with sheer veracity and enlightenment. Writing about the wine industry is like searching for a cache of truth bombs to hurl. I’ll tell you this for free – they’re bloody hard to find. You see, a good truth bomb requires a kernel of novelty.

And there is nothing really new about the issues. They sort of rinse-and-repeat in cycles. One such rebounding issue is the lamentation of why South African wines aren’t more successful in international markets. 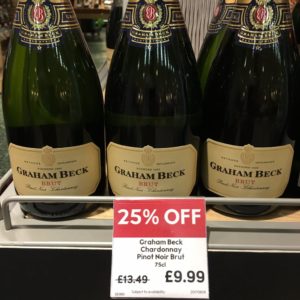 I witnessed this topic  being debated again on Twitter this week, specifically around the role of massive retailers in the UK. The inimitable wine marketer Emile Joubert kicked off the proceedings by quoting a tweet from British wine expert/TV presenter Joe Fattorini, that showed an image of Graham Beck on sale in UK retailer Waitrose. Joubert poked fun, calling it “British retail’s greatest contribution to the wine industry: the rock-bottom promotion”.

You can follow the thread here but essentially Fattorini suggests that poor wine marketing and ineffective branding might be more to blame for the low pricing than the actions of the big UK retailer. Greg Sherwood MW waded in to point out that you can’t really claim that Graham Beck are guilty of either of those, and Fattorini never clarified who he did mean was doing poor marketing and ineffective branding, but he does suggest that there is more to it than simply lazy retailing.

He then directs the conversation to The Wine Show (without mentioning it by name) and says that the hope is by putting “great producers like this in front of 10’s of millions of TV viewers” encourages people to buy better wine and improve margins at big retailers.

There were more tweets and a few others joined the conversation, but in this flurry of exchanges, I was looking for the elusive truth bomb.

The matter here seems to come down to one of our favourite old chestnuts – the image of South African wine abroad. Tweets Joubert: “This I fail to comprehend: no other New World wine country gets as much PR, publicity and hype as South Africa. Why no improved image?”

The answer seems to be two-fold.

Firstly, we still export too much bulk. Our overall export value is 9th in the world, behind pretty much every main wine rival we have, including New Zealand, Australia, Chile, Germany and Italy. Looking at the UK specifically, we aren’t even one of the leading five importing countries, based on value – see here – but we do make it into the top five when that metric is based on volume rather than value – see here. To oversimpllify a complex issue, the average UK consumer still sees us as high volume, low price – which is pretty much the mark of death. But there is more to it than that and I don’t have the column centimetres to get into that here.

Secondly – isn’t it time we take a hard look at the actual efficacy of PR and publicity?

I loved The Wine Show. What’s not to love? Two charming Matthews, traveling around the world exuding boyish charm and dashing good looks, talking about wine in a way that’s really pretty accessible for most people, with Joe Fattorini and Amelia Singer there to provide some proper wine know-how. I watched it because I’m a bit of a wine nerd. But would people who buy prosecco in Waitrose while they’re shopping for dinner be the type of people who watched The Wine Show? Some, perhaps. But you have to go a long way to convince me that people who buy wine in grocery stores are ones who read wine blogs and watch wine shows on telly.

And while I thoroughly enjoyed the segments on South Africa, I can’t help but wonder how much of an effect it really had. Fattorini seems to suggest that our appearance on the show had a notable positive influence. And I’m sure it did. But can one 5-minute segment on an already strong brand like Klein Constantia serve to launch South African exports into the stratosphere?

Probably not. But the general response always seems to be: “It couldn’t hurt”.

And there it is: the truth bomb in that telling response. “It couldn’t hurt”. Incidental coverage instead of a well-funded and concerted marketing campaign.

We seem to be so hungry for recognition that all and any bit of publicity is embraced as some magic bullet that’ll put us not only on the map but on the top of the pile. And then we are surprised when another year’s numbers and statistics come out and we’re still ranking behind our rivals in terms of both value and volume.

Marthélize Tredoux is the co-owner and editor at Incogvino. By day, she helps SA wineries sell their wine in the USA. She won the Veritas Young Wine Writers Competition in 2013.