In January of this year, our industry was told point blank that as far as the world is concerned, our image isn’t sexy. Brand SA isn’t sexy. Our wines aren’t thought of as sexy. An unfortunate sentiment. But not surprising. I’ve seen what the world sees. I’ve seen what we pump out to the globe en masse. It’s as sexy and enticing as a waterlogged Labradoodle – not entirely unappealing but shapeless, damp and a little dejected. 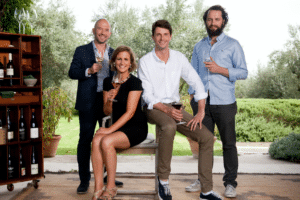 Cast of The Wine Show.

Yesterday, my eyes were treated to a rare delight when I was introduced to a new series that will be released later this year on ITV: The Wine Show. An unassuming title. Simple. Efficient. A show about wine. Fair enough. But, dear reader, the trailer for this show – this visual amuse-bouche – is delicious, delectable and whet more than just my appetite for wine. Feast your eyes here.

A quick synopsis: Matthew Goode (from The Good Wife and Downton Abbey) and Matthew Rhys (Brothers & Sisters and The Americans) are preposterously charming, dapper British actors who host a 13-episode series wherein they explore wines of the world. They aren’t connoisseurs and have no formal training in wine – self-professed amateurs. To help them along, they are assisted and guided by a team of wine experts who travel the globe (d bring back all kinds of unusual delights for the Matthews to indulge in and wittily banter about.

Alas, as the giddy rush of seeing these resplendent specimens dedicate themselves to my favourite subject subsided, my mood turned dark.

You see, dear reader, I realized just then that the British have just made learning about wine drop-dead sexy. Suave, engaging and soft-on-the-eyes presenters combined with rich content and stunning cinematography is a knockout combination. They’ve gone and done something that we will simply never be able to do.

Now, I understand that money is the first and most obvious “Yes, but” here. Budget, budget, budget. Many average British TV series make their way internationally purely because of the distribution network already in place. Compared to local… Well. Let’s not compare local to anything and rather just say we did.

But even so – even taking into account the bigger budgets, the might GBP versus the sniveling ZAR and the devilishly handsome actors – I’m left despondent at the thought that we can’t give enough of a damn to produce something (even if on a smaller scale) that at least strives to be nearly as brilliant.

And you know WHY we will probably never create something on par with that level? Yes. It does circle back to the money, but perhaps not in the way you think. From what I see on the little bit of local TV that I do watch, I can only assume that we are incapable of producing mainstream media of any remarkable quality without peppering it with vulgar advertising and marketing and branding and more selling and ugly, naked commercialism at very turn and in every ad break. There is seemingly no room and certainly no money to simply create something spectacular, simply for the sake of making something magnificent. There is always an urgent push to ram a product/experience/app/service down the viewer’s throat every two minutes.

And THAT is why we’re not sexy. Yes, wine is a business. Yes, we want to sell wine. But do our wine brands have to be consumed with the obviousness of it all? Slapping more logos over a product does not a better brand make.

It’s like we don’t even know what sexy means. How can we be sexy if we don’t recognize it unless it gets in our face? Don’t be so obvious. Don’t put it all out there. We need allure. We need to show some style. Less comfy pants and granny panties, more silk stockings and suspenders. In a world of Kim “I have nothing to wear” Kardashians, we need to be Monica Belluci.