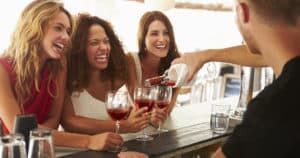 It has been quite a long and trying year, so instead of picking a fight or moaning about who did or didn’t do something right or wrong this time, maybe today we just ramble on about wine for a bit. It is, after all, the reason we’re all here.

Wine is a very divisive thing – it speaks so closely to personal taste, bias, association and even loyalty that no two wine drinkers would ever likely agree 100% on likes and dislikes.

It’s all a rather wonderful evolution of taste, when you think about it. For most, it goes from a general preference for the sweet and approachable, through to discovering aromatics, embracing tricky tannins, passing through the appeal of big hitting alcohol bombs and then eventually settling into the comfort of sheer elegance. Somewhere belong these steps is the gateway to wine geekery – the right wine at the right time opens up a world of possibility.

Thinking about the many factors influencing taste and preference, one can definitely also add level of knowledge to the equation. Running the gamut between the average joe through to the crabbiest of critics, what you know (or even just perceive to know) about wine ends up shaping your drinking habits.

It occurred to me recently that this is one of the more complicated factors to take into account when thinking about the market in broad terms – and that the people who are doing the thinking all fall into a niche area of expertise: we all know more than the average person about wine.

And the more I think about it, the more I wonder how this deepens the chasm between those producing, promoting and pushing wine and those on the receiving end. The industry side does a lot of market research, trying to figure out what people are drinking and what the consumer wants and doesn’t want and what will sell – but the people interpreting the data are all inherently biased in their own ways.

You could also pick apart the very idea that people actually know what they want. In the popular 2004 TED Talk entitled “Choice, happiness and spaghetti sauce”, Malcolm Gladwell reflects that “the mind knows not what the tongue wants”. What he refers to is that it’s pretty much useless asking people what they want – because they don’t know.

Discussing this type of issue with a young wine entrepreneur recently, he mentioned that what should be done more is to literally go out in the street and get random people to talk about wine. And don’t ask them too many analytical questions. Just ask them what they drink, and almost more importantly, when and where. Understanding the moment that wines are enjoyed in could be as valuable (or even more so) than endless survey data about style, sweetness and alcohol content.

We think a lot about wine, though I suppose I’m curious as to whether we think enough about how we think about wine.

Maybe something we should think about. Preferably over a glass of wine.