The Six Nations Wine Challenge has been with us in various guises for over 15 years. It started as the Tri-Nations Challenge and was meant to run parallel with the rugby championship of the same name. Along the way, it morphed into a Southern Hemisphere show, and, more recently into a competition in which most of the major New World producers are invited to play. It now judges roughly 100 wines from each of six producing nations, spread over 16 classes.

Countries with strong currencies deliver stronger entries simply because the cost of participation is not an impediment. For the past few years, Argentina has not been able to field a line-up while Chile’s representation has been a little fragile. Canada, which came on board a few years back, is well-represented in select categories but is not yet able to fill out all the classes. Australia, New Zealand, the United States and South Africa have the breadth and depth required to pitch up at full strength.

Over the life of the competition, various trends have emerged. Given the participating countries, it is possible to draw conclusions which speak about progress within the various industries, as well as the role of the selectors, the judges and the nature of their interaction. This isn’t scientific research – there are no double-blind trials and personal idiosyncrasies play a role. But the patterns are fascinating enough to be worth sharing.

In the very early days, when it was just Australia, New Zealand and South Africa in the game, the dynamic of two Antipodean palates versus a South African one probably worked against South Africa. There was no malice to this – simply that certain styles appealed more to the Oceanic judges, and this may have left the Cape a little marginalised. To adjust for this, a UK-based fourth taster (Robert Joseph) was invited onboard and served as a chairman for a few years. In those early years, South Africa won very few trophies. While cultural/country taste preferences may have played a role, the results were probably a fair reflection of the ordinariness of our offering: a couple of smart wines per category, a few of which percolated to the top of the class, but too many pedestrian wines to make a real impression.

The next phase came with the arrival of the South Americans, initially with strong representation from both Chile and Argentina. Firstly, the Cape’s massive progress in terms of clean winemaking and healthier vineyards started to become evident. Secondly, the judging dynamic changed, as the Antipodean judges found themselves in the minority.  The number of trophies we took home increased significantly, as well as our overall medal count. At one stage we won more class trophies than anyone else. However, we never once took the prize for the best-performing country overall: we had exceptional wines in several categories, but not the depth to challenge the Australians or the Kiwis.

Then Argentina’s entries began to fade, while the United States, followed by Canada, were invited to join. Again the palate dynamic changed, as did the spread of entries. The Americans fielded a credible contingent which overlapped with our best classes. The Canadian selection shared strong similarities with the Kiwis. Within a year North America took the lion’s share of the trophies, though Australia and New Zealand still dominated the Country of Show stakes. 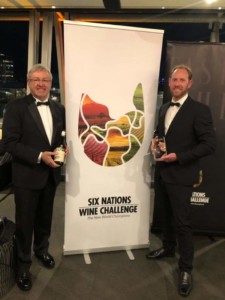 South Africa has continued to do very well: this year we bagged two trophies, and four runners-up (see here). Our success in winning the sauvignon blanc trophy means we beat New Zealand in the class on which their international reputation rests while taking the trophy (as well as the runner-up slot) in the Bordeaux blend class suggests we have wines to challenge Napa’s accepted supremacy in this category. We were also runners-up in Cabernet, Chardonnay, Malbec and Riesling – a clear indicator of the versatility of our wine industry and the breadth of our terroir.

It’s easy to attribute too much to the results but some broad conclusions seem indisputable. The first is that in the last ten years we have made enormous strides in terms of wine quality. This hasn’t been only amongst the “New Wave” producers who have enjoyed a disproportionate share of the international coverage on Cape wines: virtually no New Wave wines are entered in the Six Nations Challenge because the producers either don’t have the stock or money for the entry fees.

Secondly, over the years we’ve won trophies in at least 10 of the 16 classes of entry. Only Australia – whose wine industry is significantly larger than ours, with three to four times the number of producers and an entire continent available to plant to grapes – rivals the Cape in terms of the quality and diversity of our offering.

Thirdly we’ve achieved this without subsidies or assistance. The organisations which are supposed to promote SA wine internationally won’t allocate any budget to assist producers, or at least to incentivise them by refunding their submission fees if they win an award. SARU gets the Springbok squad to Japan, Cricket SA gets the Proteas to the UK. WoSA would rather pay (a lot more money) to host the Wines of South Africa Sommelier Cup in the Cape every second year. The Cape wine industry gets to the Six Nations through the passion, goodwill and personal investment of a few individuals.