Michael Fridjhon: What future for the New Wave?

Those who are serious about South African wine cannot fail to be excited about the dynamic energy which courses through every aspect of the industry, from the achievements of the “new wave” (some not so new anymore) to the profoundly satisfying premium wines of the Cape Winemakers Guild members. If the latter are more like the Left Bank Bordeaux chateaux producing polished high performance wines, the former are more akin to Burgundy, working tiny parcels and seeking to obtain more nuanced expressions from single sites.

As France has shown, both approaches can exist in the vinous firmament. The Medoc model allows for a statement of place (Lafite tastes different from Mouton and Latour, even though they are all in the same appellation) and a statement of craft. Burgundy is capable of almost infinite detail – though the number of growers who are in a position to coax this perfection of expression from an appellation is relatively limited.

Most of our new wave producers work to the Burgundian ideal – in that they wish site to trump style. This means that they must work within the narrowest possible definition of site (so single vineyard rather than appellation) and they must tailor their winemaking accordingly. As a result, they are generally exponents of the minimal interventionist school. They eschew new wood, they avoid technical adjustments, many describe themselves as “natural wine producers.”

Just as Burgundy has lately become more interesting and more collectable than Bordeaux, so the South African new wave has been enjoying a disproportionately high share of press. Ask most geeky wine drinkers what they are trying to buy, and the odds are it will be the latest releases from the more boutique size operations. The CWG still reels in the money, but it’s at one high profile event which is the Cape equivalent of the Bordeaux Primeurs.

So far the analogy works well enough. However it founders on the one key component which distinguishes Burgundy from the Cape’s new wave. Simply put, it’s about ownership, and therefore not only about security of tenure, but more importantly, about persistence of site. There are vineyards in Burgundy which have been in the same family for countless generations. Different heirs/owners/winemakers have done better or worse with their inheritance. However, the one certainty is that they were committed to growing grapes, which meant working with pinot or chardonnay from that particular site. 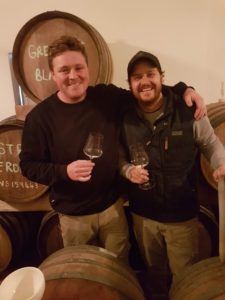 South Africa’s new wave made its reputation by creating or evolving the Cape’s equivalent of Burgundy – small sites identified as much by what is planted on them as they are by their location and their geology. However, in almost every case the producers don’t own the land. They may lease it, they may have 100% control over how it is farmed, but they have no say over its future. Nothing is for ever: Chris Alheit’s Radio Lazarus vineyard finally succumbed to the drought – notwithstanding the efforts of real professionals who wanted to keep it going.

Many of the sites supplying fruit to the new wave producers are owned by growers who, until the tide changed, delivered their grapes to nearby co-ops for a pittance of their true value. While now they have a financial incentive to keep their vineyards productive, many are also financially marginal. The extra income they obtain from the garagistes and boutique winemakers who pay a premium for their fruit may not be sufficient to ensure that things stay the same.

The Cape is losing vineyard at the rate of 8 hectares per day. On average, one grower abandons grape farming every second day. You don’t need a sangoma to tell you that in this attrition some of the sites supplying grapes to the new wave will vanish – either because the owner has checked out, or because he decides that an alternative crop will better suit his needs.

The new wave movement has grown at an extraordinary rate over the past ten or fifteen years, primarily because of the availability of under-appreciated old vineyard sites. For the growers as much as for the producers this was a marriage made in heaven. There were plenty of parcels of vines capable of yielding suitable fruit, and not too many winemakers chasing them down. Meantime, while the number of producers has increased, the number of sites has diminished. Like Radio Lazarus some have simply withered and died. Others have been abandoned. Many of the best are now contracted, with other blocks belonging to the same owners optioned to existing producers. Newcomers today are not going to find it as easy to identify these special sites, and to secure them for as long as it might be necessary to persuade their owners to keep them going.

This doesn’t mean that the model of split ownership/production is fatally flawed – merely that its benefits are finite. This should not come as much of a surprise. There aren’t all that many great sites in Burgundy (or anywhere else in the wine world) and they are there either for those who nail them first, or for those who pay most. The charm of the Cape model is that initially it was driven by passion not cash. Now that there’s palpable value in what is being produced, and therefore in the primary resource, expect buyers with deep pockets to supplant the bright-eyed idealists.