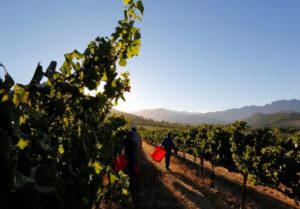 The drought years have – officially at least – given the wine industry cause for pause, to take stock of itself, and its probable future. For much of the past 18 months we’ve been told that unless grape prices increase, we’ll lose so many growers that the industry itself will shrink to the point that it will no longer have critical mass. The stats are real enough: in 2001 there were 4390 of them: 15 years later their numbers were 30% less (probably fewer than 3100 at the end of last year). At the same time the national vineyard has shrunk by just over 10%, from 106 000 hectares to 95 000.

It’s easy to understand why those with old bush-vine vineyards are finding the going hardest: the yields are small, the cost of harvesting greatest, and grape prices cannot begin to compensate for the running expenses, let alone the capital value of the land. Unless the fruit is very special, and has been identified as a potential source of premium single vineyard wine, keeping it going is pretty much the same thing as trying to keep an unexceptional and battered car on the road long past its scrapping date.

Much of the focused work within industry bodies in the past couple of years has been around the viability in the agricultural side. This is hardly surprising: the body with the skills, competence and budget to do this is VinPro, an organisation whose mandate is the primary production sector. It’s also right that it should be thus: without fruit, there is no industry. It doesn’t matter how strong the brands, how well developed the logistics network, how good the technical training: no grapes, no wine.

The research into what it takes to stop the attrition amongst growers speaks of ratcheting up prices to a point where grape farming is viable. With grape prices averaging around R5 000 per tonne, yields in the Coastal Region appellations averaging less than 10 tons per hectare, and farming costs per hectare comfortably above R50k the arithmetic appears inexorable.

What these figures don’t reveal is a much more telling analysis of what is wrong with our wine industry: if growers have been bailing at the rate of one every four days (!) for the past fifteen years, if at the same time we are losing vineyard at the rate of two hectares per day over the same period, how come we haven’t arrived at a point of shortage so acute that prices are rising because supply is vanishing while demand continues to grow?

The answer is the Cape wine industry’s dirty little secret: for all this tragedy of lost growers and vanishing vineyard we are (allowing for vintage related volume variance) producing more wine than ever before. In 2001 our 106 000 hectares of vineyard yielded 977 000 tonnes of fruit. In 2016, with 30% fewer growers and over 10% less vineyard we managed to produce a whopping 1.4m tonnes (in a vintage already affected by water-shortages – in 2014 we harvested 1.52m tonnes).

This vast increase is not achieved in squeezing the grapes harder: it’s raw tonnage of fruit, and that can only be achieved through dramatically higher yields: in 2016 we were getting 50% more fruit from every hectare. Now while it doesn’t always follow that higher yields come at the expense of quality, there’s no way we can talk about “low-yielding and rare” while this is the new reality.

Lurking in all these figures is the much more damaging transformation of our industry, from one driven by premium fruit grown in prestige locations, to one of nondescript lowest common denominator wine sourced from irrigation land as far from our premium wine areas as the Australian Riverland is from the Yarra Valley. Stellenbosch represents 16% of the national vineyard but produces only 8% of the crop. The Northern Cape has 3% of the national vineyard and produces 18% of the white wine crop (white varieties account for 90% of the Northern Cape’s vineyards).

If you unpack these figures, the situation is more parlous than anyone imagined: we’ve suffered a massive loss of vineyard and a frightening attrition among grape growers. We’ve managed to compensate for this loss by bumping up yields of the most amorphous commercial grape juice. Growers in the fine wine production zones are abandoning grape farming because it isn’t viable. Growers in the high yielding irrigation lands have more than taken up the slack. As a result, for many of the more industrialised growers, business is booming. Buyers of the fruit – in other words, those who process the megatons of tasteless, flavourless juice – have no need to pay more: they’ve merely shifted their purchases to a more cost-efficient source of sugar water.

Without an incentive to pay more for grapes, the producing wholesalers can continue to apply a model which is destroying the fine wine business at an alarming rate. There is no chance that grape prices will increase – drought conditions or not – because there is no need for anyone to buy the fruit which defines the very “Capeness” of Cape wine. Accordingly – and this is because nobody cares enough – I fear it may already be too late to save the quality wine industry of the Coastal Region.