Michael Fridjhon: Why it’s a good time to be in wine – five reasons to be optimistic about in 2018

It hasn’t been an easy year for South Africa, notwithstanding the ever-increasing excitement around our wines in many of the international markets. The local market is depressed, exchange rate fluctuations have taken some of the cream out of the foreign trades, the political situation is parlous and doesn’t look likely to improve for some time yet. Our national rugby team should have their passports withdrawn, Bafana Bafana’s lack of success means that only politicians (on our money) will get to the World Cup in Russia next year, the Proteas were hammered in England (beating Bangladesh doesn’t make up for this) – and the Cape, a key driver of the national economy – is out of water. No wonder the editor asked me to try my hand at something a little upbeat.

He wants me to identify five reasons why 2018 is a great time to be in wine. When I looked at this suggested topic my first impression was that with the water shortage in the Cape the only way to maintain fluid involves wine and perhaps he’d started a little earlier than usual. Five positive ideas were about four more than immediately sprang to mind – and I’m usually regarded as an incurable optimist. But here’s a thing – we none of us want to dwell on what we know is wrong, and what we suspect will be worse, so with a little reflection we can always find a soft spot in a hard landscape.

The obvious feel-good is the tsunami of positive press the wine industry has garnered, a process which began at least five years ago and now is starting to build to a crescendo. Janice Robinson, in her late October review of the Cape’s New Wave, was generous with her scores and comments, while at the same time a little reserved about the “optimistic” pricing from some of the better known producers (read more here). The good news has been coming in thick and fast, but pricing has been way behind the curve. It will take some courage (and a useful measure of shortage) for this to change, and the Mullineuxs who Robinson singled out in particular are better placed than anyone else to make this happen. So the first of the feel good projections for 2018 is that we will start to see a correlation between reputation and price.

The second, which is linked to this, will be the shortage of good wine – everywhere. Many European appellations have seen their smallest harvests in half a century, and with the Cape’s water crisis lower volumes (especially from the bulk wine producing regions) will be a reality. The good thing about shortage is that it changes the dynamic of price negotiations, and from what has been a buyers’ market for a very long time, expect a dramatic reversal. There will still be cheapish wine – which is not ideal (though it’s worth observing that the recession is more likely to take consumers out of the market than a 10% increase in on-shelf pricing). But the change in the dynamic of the trade will help the growers to acquire the confidence to negotiate a closer-to-survival deal, and branded wine producers will use the opportunity to leverage up trade prices. Just for once it’s important to replace a short-term consumer’s hat with a long-term grower’s one. It’s what our farmers need (merely to survive) and it couldn’t come at a better time.

The third reason why 2018 has good news for South Africans (producers and consumers) is that the Rand is unlikely to strengthen – even if the Zuma faction is ousted in December – as long as the losses incurred through theft and corruption leave us on the brink of a downgrade, or already in the hole. We are easily the country whose best wines sell on the domestic market for a fraction of their true international value (using any hard currency benchmark you like). 100 Euros buys you pretty much anything coming from a Cape cellar: it’s not half way up the pricing pyramid in Spain, France, Italy, Portugal, Australia, New Zealand or the United States. Even if you’re earning in Rands, the cost to your monthly budget (in purchasing power parity measure) of eating and drinking well is a fraction of what it would be anywhere else. The weaker the Rand, the wider that gap – it’s the only consolation I can think of when it comes to considering the damage wrought by the Psychopath of Groote Schuur.

The fourth reason is very much a matter of timing: the fabulous 2017 whites, the brilliant 2015 reds and the not-to-be-ignored 2016s will all be available. There can be no better time to be laying down stocks, or simply drinking furiously as oblivion approaches. Just consider the fate of the Europeans in the ghastly recession era of the 1930s: they had to sit out fifteen years of almost relentless junk: between the great 1929s and the extraordinary 1945s there were only a couple of vintages worth drinking – everything else was too horrible to contemplate. They had no money, no work, and no wine worthy of providing the much-needed consolation demanded by the times. Our currency may have plunged into junk status, the Zuma faction may continue to be in control, the economy may have ground to a complete halt, but the bottles on the shelf will be well priced, and from some of the best vintages we have ever seen in the modern era of Cape wine. 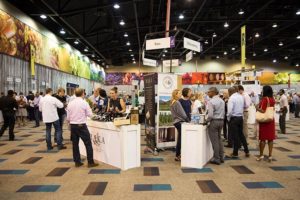 Finally those of us “in wine” (to use the editor’s words) may be in the best place possible in what will inevitably be a cusp year. The economically active “New South Africa” is united by wine, and in wine. Anyone who attended WineX 2017 will have had a sense of what this means: the room represented the (middle class) South African demographic in every possible way: it was young (but not juvenile), economically active, comfortable together as a crowd, vibrant, alert and ready to embrace life. If you didn’t know anything about Eskom, Transnet and the Saxonwold Shebeen, if you hadn’t watched the Rand slide, if you didn’t know that the minister of finance was a well-dressed puppet on a string, you wouldn’t have had a care in the world. Wine is a great unifier – one that we will need desperately for the desperate times ahead. There can be no better time to be “in wine” than in 2018.