Moderation required in the closure debate 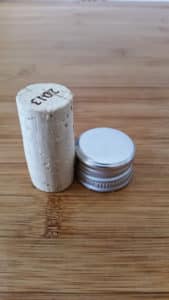 The cork vs screwcap debate is in danger of becoming too polarised. During the recent Elgin White Wine Retrospective, a workshop convened by the Elgin Valley Wine Guild to analyse strengths and weaknesses of members’ current-release wines, there were two incidents which again illustrated that deciding on the most appropriate closure is no easy matter.

Twelve examples of Chardonnay in three flights of four. First up, the Iona 2013 under natural cork next to Paul Cluver 2013, Lothian 2013 and Corder Cool Climate 2013, all under screwcap. We were tasting blind and I thought what turned out to be the Iona looked particularly pretty and alive while the others all showed some degree of reduction.

As to why Iona winemaker Werner Muller opts for cork, he initially says “That’s what they do in Burgundy.” Pressed for more detail, he says “I like what I see when it comes to ageing. The process is less retarded but also more interesting – it’s about complexity.”

On to the next flight and the first bottle of Oak Valley 2013 under natural corked was spoilt by TCA, cork doing great things for the Iona but not so much the Oak Valley…

Jamie Goode: Is there a more important winemaking decision than picking date?

One of the critical decisions facing winegrowers is when to pick. But what is optimal ripeness? Assuming that this question can be answered, it still leaves uneven ripeness levels in...

I’ve gone public saying that I hate tasting notes. Maybe this is a little hyperbolic. After all, like most wine writers who feature individual wines, I write them all the...

The late Duimpie Bayly, doyen of the industry, once said to me that the most suitable sites for Riesling in this country are planted to Sauvignon Blanc. If his observation...