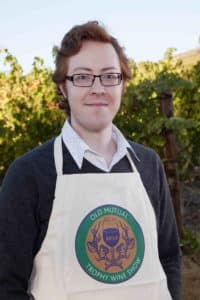 Alex Hunt a.k.a. Ron Weasley a.k.a. the ginger Michael Caine

Alex Hunt is the most likeable, well-spoken heretic you could possibly come across. Past captain of the Oxford University blind wine-tasting team and now purchasing director of UK wine shippers and wholesalers Berkmann Wine Cellars and Master-of-Wine-in-training, he thinks South African Sauvignon Blanc is not all it’s cracked up to be.

One of the international judges officiating at the 2010 Old Mutual Trophy Wine Show, he is part of the panel that after reviewing over 100 examples of unwooded Sauvignon Blanc, awards only one gold medal, this going to Cederberg 2009.

While it is generally accepted that South Africa is making some pretty decent Sauvignon, Hunt feels that many examples are “too manipulated”. For him, the variety works best when it is “frank and clear in purpose” and does not benefit from “obvious winemaking tricks”.

His greatest misgiving about the category is the wines showing evidence of “staggered picking” where winemakers harvest some of the crop early to achieve freshness and some later to gain greater fruit expression. “On analysis, these wines look smart but ultimately you’re working with two separate wines and you end up with something that sits awkwardly.” What becomes problematic is when green, grassy flavours as well as late-harvest peach and apricot flavours can be detected in the same wine. “Staggered picking is theoretically not illegitimate but it has to be done subtly.”

His other significant criticism of the class is the “funky” character derived from extended lees contact that is often in evidence. “I suspect this is being done to bulk up what was quite a neutral wine to start with but I’m not sure I see the point. It’s detracts from the variety’s inherent purity and freshness.”

Hunt is, however, generally bullish about the state of South African wine. “There’s been a dramatic evolution in technical quality and breadth of styles over the last 10 years. South Africa has a broad variety of climates and soils and couple this with the energy and dynamism of particularly your young winemakers and the situation is fertile in every sense”.

According to him, the next stage in the industry’s development will come with the achievement of wines possessing “better natural balance”. He feels there are still too many wines that “show a degree of compensatory winemaking” – human intervention to make the best of a less than perfect crop.

Key to quality advancements is to keep working on site selection and viticulture, and Hunt urges an end to the tendency of small producers to plant multiple varieties. “You can attempt to offer a spread of products in line with what the market apparently wants or you can focus on excellence.” He concedes that in contrast to the Old World where product aesthetics dominate, the New World is much more inclined to be led by the consumer and suggests that ultimately a hybrid approach is most appropriate. “If you’re going to undertake the internationally popular varieties, then you have to over-perform.”

Hunt also judged the Cabernet Sauvignon as well as the Bordeaux-style red blend classes at Trophy Wine Show, with him finding the latter “more successful” than the former. “Wines from Cabernet Sauvignon alone were typically green and skinny and crying out for some Merlot fleshiness. They felt unloved.” For him, there were too many wines that were either slightly under-ripe or raisined. “There were few bull’s eyes, and for that you need viticultural confidence: a happy crop from the right site brought in on the right day.”

The Bordeaux-style red blends, meanwhile, were much more convincing. “These wines usually sit higher in a producer’s range and hence attract better fruit. However, Cab is not easy on its own and needs the other Bordeaux varieties for complexity and texture.” Hunt waxes lyrical about the potential of Cabernet Franc in local blends, describing it as a “natural freshening agent” thereby giving the producer the confidence to pick his Cabernet Sauvignon a little riper. “It’s a way of getting some treble [relative to bass] into the mix. Cab Franc planted in the right conditions? I think it could be the ace up South Africa’s sleeve. The magic dust that takes you from good to great.”

Looking at the international wine business in broad terms, Hunt reckons that South Africa is relatively well positioned. He praises the country’s entry-level wines for their good value and says that it has allowed the consumer to become comfortable with the basic quality on offer. “These wines have given you a foothold in the market. The danger is you get stuck there but at the very least it keeps the pipelines open.”

At the top end, South Africa also looks good, with a number of small producers starting to produce excellence. “You need to ensure that these high-end wines get to the opinion-makers and are constantly remarked which will get consumers to keep on exploring. Burgundy is good model. Any one person only sees a fraction of production but the over-all impression is good.”

It’s the gap between the top and the bottom end that needs attention, however. “Mid-level wines [£8 – £20 a bottle in the UK] are a fertile hunting ground but you need volumes – it’s not just about price or status.”

Hunt feels that if South Africa has one key weakness at the moment, it is a lack of depth. “South Africa needs to raise the average quality of its fine wine even higher. You increasingly have some great wines, and these are not flukes. But you need to avoid a polarisation between the best and the rest. Lessons must be learnt from those that shine.”