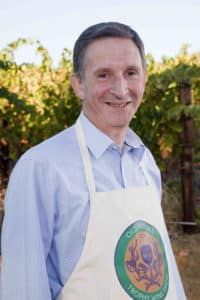 During the course of the 2010 Old Mutual Trophy Wine Show, international judge Dr Tony Jordan chairs the panel that is responsible for reviewing the 127 Shiraz entries. From the moment he first encounters it, he is particularly taken with the wine that goes on to be judged not only best in class but best red wine overall and he is completely correct when he praises it for its cool-climate elegance for it turns out to be the 2008 vintage from Eagles’ Nest in Constantia.

As managing partner in worldwide winemaking consultancy Oenotec and previously CEO of Domaine Chandon Australia, Cape Mentelle and Cloudy Bay, Jordan knows a thing or two about market trends. According to him, there’s a Shiraz revolution coming, with the big styles that had their heyday in the 1990s being replaced by something altogether more elegant.

What Jordan reckons is on the way out is the concept of “massiveness”: wines with huge intensity of flavour, 15% alcohol by volume and heavily oaked. “There was a lot of hero wine-drinking of these sort of wines not so long ago but they’re exhausting. Too sweet, too overwhelming.”

Elegance is therefore desirable because it makes wine more accessible. “It’s what consumers are waiting for. It’s were [the New World] has to go to achieve the next wave of global success,” says Jordan.

Accessible might imply simple but that’s not Jordan’s point at all. “I’m not advocating fruit cordial. In addition to elegance, fine wine must have complexity and structure. Evidence of tannins must be present but subtle.”

Elegance in wine also facilitates distinctiveness or individuality, according to Jordan, although he quickly adds that these attributes are only relevant at the top end of the market. The global wine industry is not undifferentiated but divided into two broad sectors: 85% of production amounts to “commodity wine” (or less pejoratively “popular premium wine”) and the remaining 15% is “fine wine”.

Whereas South Africa is relatively well positioned to compete at the commodity end of the market thanks to favourable farming costs, he predicts that Australia will increasingly be forced to “withdraw gracefully”.

However, when it comes to commodity wine, provenance is of almost no significance to the consumer. “The consumer wants what’s best for his pocket. Wine will flow from the cheapest point of production to where there’s demand.”

When it comes to fine wine, however, Jordan sees Australia and South Africa much more evenly matched. “Both countries have great diversity of climate and terroir, which puts them in more or less the same position to produce world-class wine.”

Shiraz has increased its popular following in recent times precisely because it is accessible. Is the South African industry set to capitalise on this? There’s been an upsurge in plantings of the variety since the 1990s (precipitated, at least in part, by Australia’s success with it) and Jordan feels that it may well be taking over from Cabernet Sauvignon as the country’s top red variety.

However, Jordan says that all New World wine producing regions face the same problem, which is that there is simply too much of the stuff around. Global wine production is necessarily cyclical and while Australia in particular and the New World in general enjoyed a boom period in the 1990s leading to a huge increase in plantings, the worldwide financial crisis of the last few years has been devastating.

According to Jordan, the trick to surviving as a fine wine producer in the next few years is not simply to make wine of a suitable standard but to make wine whose provenance is something that the consumer recognises and cares about. “Small artisanal producers must sell at a premium if they are to stay in business. They need products of curiosity and fascination.”

Though Shiraz has acquired a reputation as being “a good warm climate variety”, Jordan says that he suspects that wines that offer both accessibility AND individuality are going to come from cooler climates. Not only are wines from warm climates typically weighty and powerful, but when grapes are picked too ripe, flavours converge resulting in generic wines.

“In Australia, we’re increasingly convinced our finest wines are going to come from cooler areas and are exploring accordingly,” says Jordan. Places mentioned include the likes of Margaret River and Great Southern in Western Australia, Coonawarra in South Australia and Mornington Peninsula in Victoria.

So much of Australia’s reputation for Shiraz is bound up in the full-bodied wines of the hot, dry Barossa, which poses the question as to whether or not this region will continue to feature. “I want to challenge viticultural and winemaking precepts. The same vines can be picked earlier and by using whole berry and even whole bunch ferments in the cellar, more elegant wines can be achieved,” says Jordan. “I think we’ll see a lot more Pinot Noir techniques applied to the making of Shiraz.”

There are plenty of areas in the Cape where Shiraz is planted that might also be deemed “warm climate”, so what hope for them? “Wines of elegance can be achieved in such areas but you need spot-on viticulture,” says Jordan. “You’ve got to have the right crop levels to achieve optimal ripeness.”

And if low enough alcohol levels cannot be achieved in the vineyard, then the reduction of alcohol in finished wines must be considered. “De-alcing is an option even in fine wine, dare I say,” comments Jordan. “But if such manipulation is required, you have to wonder if you are working in a classic area to start with. My feeling is that after 100 years, any area becomes classic.”